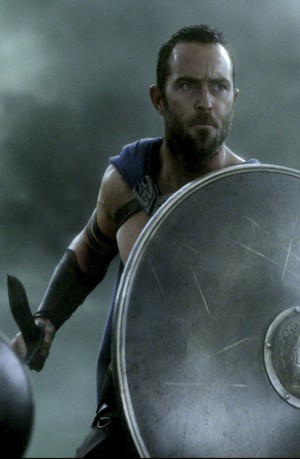 It takes a special kind of guy to lead a battalion of Greek Warriors into battle with a Persian demi-God. It’s one of those “fate of humanity” defining moments. Lucky for us, we have Sullivan Stapleton shouldering that burden. The star of the new 300: Rise of An Empire might just be the perfect actor to fill the sandals of the mighty King Leonidas, who was expertly portrayed by Gerard Butler. Even though the mighty 300 Spartan warriors won’t be around to partake in the sequel, the trimmed down Greeks are ready to pick up their swords and carry on the fight.

Zack Snyder and Frank Miller are back behind the scenes to direct this wonderful visual treat. They cast a relatively unknown Aussie in Stapleton in the lead role and entrusted his charisma and talent to carry the franchise. Early results are positive. Fans have found themselves drawn to the sequel with an opening weekend of $136 million, as well as an affection towards Stapleton himself. “I can see it has opened doors,” says Stapleton, “As for the sequel, it’s a huge story, and those battles between the Greeks and Persians went on for years and years. I hope to God we do another sequel.”

The good news is that Warner Bros seems to like Stapleton. After using him for a key role in Gangster Squad and now 300, the studio has a couple of options with the actor, one of which most certainly will be another 300 installment, as his Themistokles comes to an inevitable showdown with Persian god king Xerxes (Rodrigo Santoro). Right now, Stapleton is focused on keeping his head from swelling, figuratively and literally, and slowly planning to test out the opportunity that a global hit will provide him.

View the Trailer Below: