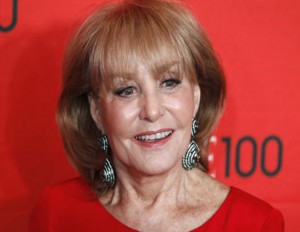 On December 14, 2014, Barbara Walters and ABC broadcast The 10 most fascinating People of 2014. It is the 21st year Walters has done the special and the inquisitive 85 year old host was as pleasant and sharp as ever.

This year’s list consisted of some newcomers including Scarlett Johansson  and Amal Clooney, with the latter taking home the title of “The Most Fascinating Person of 2014.” It wasn’t just her philanthropic accomplishments that earned her the title, according to Walters, “marrying Hollywood’s most eligible bachelor (George Clooney), puts you on par with Mother Theresa.”

Amal beat out Oprah Winfrey (who has appeared on the list four times), along with Taylor Swift, Neil Patrick Harris and George R.R. Martin.  Previous winners include the Clintons, the Obamas, and J.K. Rowling.

In 1961, NBC hired Barbara Walters to work as a researcher and writer for its popular Today show. Her initial assignments were stories slanted toward female viewers. Within a few months, however, she lobbied for a breakthrough assignment to travel with First Lady Jacqueline Kennedy on a trip to India and Pakistan. The resulting report earned Walters increasing responsibility at the network.

Walters remained on the show for 11 years, during which time she honed her trademark probing-yet-casual interviewing technique. By 1972, she has established herself as a competent journalist, and was chosen to be part of the press corps that accompanied President Nixon on his historic trip to China. In 1975, she won her first Daytime Entertainment Emmy Award for best host in a talk series.

In August 1997, Barbara Walters premiered a mid-morning talk show called The View, for which she is co-executive producer and co-host. Although officially retired, she sometimes guest hosts on The View.