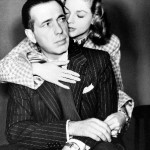 Humphrey Bogart was born on December 25, 1899 in New York City. By passing up a career in medicine, Bogart followed his love for the sea and enlisted in the United States Navy in the spring of 1918. He recalled later, “At eighteen, war was great stuff. Paris! French girls! Hot damn!” Bogart was said to be a model sailor who spent most of his months in the Navy after the Armistice was signed, ferrying troops back from Europe.

Bogart had been raised to believe acting was beneath a gentleman, but he enjoyed stage acting. He never took acting lessons, but was persistent and worked steadily at his craft. He appeared in at least seventeen Broadway productions between 1922 and 1935. 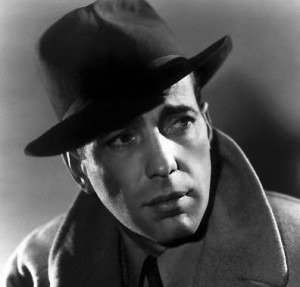 In 1930, he was offered a contract with Fox and made his feature film debut in a ten-minute short, Broadway’s Like That. After five years of stage and minor film roles, he had his breakthrough role in The Petrified Forest from Warner Bros. He won the part over Edward G. Robinson only after the star, Leslie Howard, threatened Warner Bros. that he would quit unless Bogart was given the key role of Duke Mantee, which he had played in the Broadway production with Howard. The film was a major success and led to a long-term contract with Warner Bros. From 1936 to 1940, Bogart appeared in 28 films, usually as a gangster, twice in Westerns and even a horror film. His landmark year was 1941 (often capitalizing on parts George Raft had stupidly rejected) with roles in classics such as High Sierra and as Sam Spade in one of his most fondly remembered films, The Maltese Falcon. These were followed by Casablanca, The Big Sleep, and Key Largo.

Lauren Bacall was born Betty Joan Perske on September 16, 1924, in New York City. Her parents were middle-class, with her father working as a salesman and her mother as a secretary. Once out of school, Lauren entered modeling and, because of her beauty, appeared on the cover of Harper’s Bazaar. Nancy Hawks, the wife of famed director Howard Hawks, spotted her on the March 1943 cover and urged Hawks to have her take a screen test for To Have and Have Not. Hawks was so impressed with her audition, he signed her up to a seven-year personal contract, brought her to Hollywood, gave her $100 a week, and began to manage her career. Bacall’s voice was purposely trained to be lower, more masculine and sexier, which resulted in one of the most distinctive voices in Hollywood.

During screen tests for To Have and Have Not, Bacall was nervous. To minimize her quivering, she pressed her chin against her chest and to face the camera, tilted her eyes upward. This effect became known as “The Look,” Bacall’s trademark.

Bogie was in a deteriorating marriage (his third) to Mayo Methot, an actress who was battling both the bottle and—as gossip column accounts of their brawls suggested—Bogie. When Hawks told Betty, as Bacall was known, that he’d like to cast her opposite either Bogie or Cary Grant, she remembered thinking, “Cary Grant—terrific! Humphrey Bogart—yuck.”

“I always cry at weddings, especially my own.”–Humphrey Bogart

When they met, Bacall was 19 and Bogart was 45. He nicknamed her “Baby.” Bogart was still miserably married and his early meetings with Bacall were discreet and brief, their separations bridged by ardent love letters. The relationship made it much easier for the newcomer to make her first film, and Bogart did his best to put her at ease by joking with her and quietly coaching her. He let her steal scenes and even encouraged it.

On May 21, 1945, Bogart and Bacall were married in a small ceremony at the country home of Bogart’s close friend, Pulitzer Prize-winning author Louis Bromfield at Malabar Farm near Lucas,Ohio. 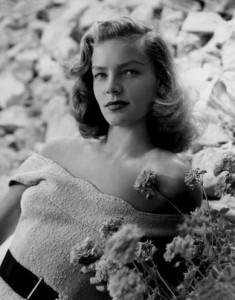 Bogart and Bacall moved into a $160,000 white brick mansion in an exclusive neighborhood in Holmby Hills. The marriage proved to be a happy one, though there were the normal tensions due to their differences. He was a homebody and she liked nightlife. He loved the sea; it made her sick. Bacall allowed Bogart lots of weekend time on his boat as she got seasick. Bogart’s drinking sometimes inflamed tensions.

Lauren and Humphrey gave birth to Stephen Humphrey Bogart on January 6, 1949. Stephen was named after Bogart’s character’s nickname in To Have and Have Not, making Bogart a father at 49. Stephen would go on to become a best-selling author and biographer, later hosting a television special about his father on Turner Classic Movies. They had their second child, Leslie Howard Bogart on August 23, 1952, a girl named after his old friend Leslie Howard.

“A woman isn’t complete without a man. But where do you find a man — a real man — these days.”–Lauren Bacall

Of the years that followed, Bacall would write, “Whenever I think of the word ‘happy’ now, I think of then.” They made three more movies together, and in their Holmby Hills house in Los Angeles, she cooked, gardened and entertained the couple’s high-profile Hollywood friends. Bogie loved it. “She’s my wife, so she stays home and takes care of me,” he boasted. “Maybe that’s the way you tell the ladies from the broads in this town.” 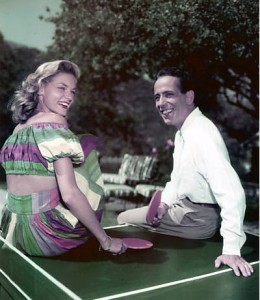 But Bacall’s real chance to prove what she was made of came in the terrible months after the winter of 1956, when Bogie was diagnosed with cancer of the esophagus. A tender Bacall nursed him throughout the illness, and on Jan. 14, 1957, he died. Afterward, the devastation that the 33-year-old Bacall suffered was nearly indescribable. She had an affair with Frank Sinatra and a rocky, 12-year marriage to Jason Robards, but ultimately it was her children (including son Sam Robards) and career that restored her. In the end, Bacall would be forever associated with her first husband. Indeed, their image as ideal lovers was so strong that in 1981 they provided the hook for a popular song, “Key Largo” — “We had it all, just like Bogie and Bacall…”

“Sometimes I get very nostalgic because he died very young and he didn’t have a chance to see his children grow at all. But on the other hand, because he never aged he’s more alive than ever to more generations. He’d have never believed this.”
–Lauren Bacall