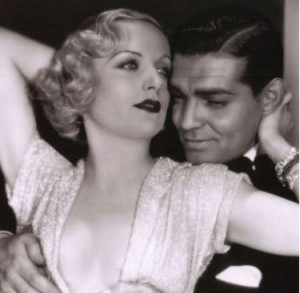 When Clark Gable dropped out of high school at 16 and went to work at a tire factory in Akron,Ohio, he figured he was probably just going to follow in his father’s path of long hours of manual labor. His dad was an oil driller and farmer, and his mother had died during his infancy. One evening after a long shift at the factory, Gable saw a play called The Bird of Paradise and enjoyed it so much that he decided to switch paths in life to become an actor. He tried to work his way in by taking an unpaid job with a theater company, but his dream was temporarily derailed when his stepmother died in 1919 and his acting ambitions were put on hold as he went to help his father in the oilfields of Oklahoma.

After three years there, he bid his father adieu and joined a traveling theater company, which quickly went bankrupt, leaving Gable stranded in Montana. He hitchhiked to Oregon and joined another company, where he met Josephine Dillon, the theater manager. Dillon, a former actress and respected theater teacher 17 years his senior, took an interest in Gable. Before long they were married, and Gable and Dillon moved to Hollywood. However, the marriage to Dillon wasn’t built on solid ground. Josephine grew increasingly bitter when Clark was being escorted around town by rich socialite Ria Langham. Ria was doing far more for him than Josephine could: throwing money at him, buying him clothes, paying to have his crooked teeth fixed, introducing him to her rich friends. Ria insisted on marriage, so Clark wanted Josephine to go to Mexico for a quickie divorce. She refused. Instead, Josehphine filed for divorce in California, citing “desertion,” knowing full well that the year-long wait period would frustrate Clark and Ria. The divorce became final on April 1, 1930. 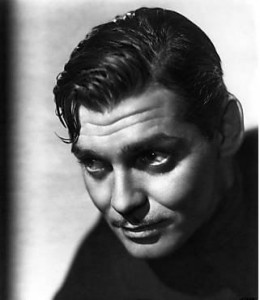 Ria and Gable married in July 1931, but success brought difficulties and other women. The two divorced in March of 1934.

After several failed screen tests, Gable was signed in 1930 by MGM’s Irving Thalberg. Joan Crawford asked for him as her co-star in Dance, Fools, Dance and the public loved to see him manhandling Norma Shearer in A Free Soul that same year. His unshaven lovemaking with bra-less Jean Harlow in Red Dust made him MGM’s most important star.

“Hell, if I’d jumped on all the dames I’m supposed to have jumped on, I’d have had no time to go fishing,” Gable told the press.

During the filming of Dancing Lady in 1933, Gable developed pyorrhea, an infection in his gums that required immediate removal of nearly all his teeth. The infection spread through his body and reached his gallbladder, and he was hospitalized. Because of delays in filming and necessary reshoots due to Gable’s illness, the film ran $150,000 over budget. When he returned to work, MGM loaned him to the then-low-budget Columbia Pictures for a comedy, It Happened One Night. It was widely rumored to have been punishment for either his bad attitude about his parts or the difficulty in shooting his last film, however it ended up becoming his vehicle to win an Oscar.

In 1939, Gable appeared as Rhett Butler in his best-known film, the civil-war epic Gone with the Wind. He was dubbed the “King of Hollywood,” and was a symbol of masculinity, admired by men and adored by women. One of those women was actress Carole Lombard. 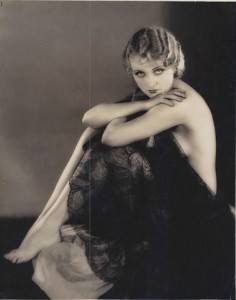 Born Jane Alice Peters on October 6, 1908, in Fort Wayne,Indiana, she moved to California with her mother. She was spotted playing baseball in the street with the neighborhood boys by a film director, and was signed to a one-picture contract in 1921 when she was 12.

In 1931, she was teamed with William Powell in Man of the World. She and Powell hit it off, and they married in 1931, but were divorced 28 months later. Carole said later that “career had little to do with the divorce. We were just two completely incompatible people.” They remained friends, starring together in 1936 in the classic comedy My Man Godfrey.

By the late 1920s, the film industry was moving from the silent era to “talkies.” While some stars’ careers ended because of heavy accents, poor diction or a voice unsuitable to sound, Carole’s light, breezy, sexy voice enabled her to transition smoothly during this period. 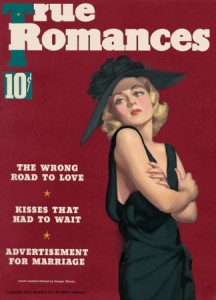 No Man of Her Own put Carole opposite Clark Gable for the first and only time. The two would not get serious until seven years later when John Hay Whitney gave an elaborate costume party in Hollywood. The invitations requested the guests appear in something white. With her unfailing sense of humor, Carole arrived at the party in a white ambulance and was carried into the Whitney mansion on a stretcher. She and Gable renewed their friendship at “The White Ball,” becoming constant companions until their marriage in 1939.

Lombard joked, “God knows I love Clark (Gable), but he’s the worst lay in the town.”

Gable said of her, “It is an extra dividend when you like the girl you’ve fallen in love with.” 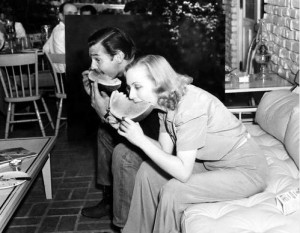 They bought and lived in a 20 acre ranch in the Encino section of the San Fernando Valley. They weren’t Hollywood socialites; they weren’t glamorous; they wanted a simple life out of Hollywood’s bright lights. They nicknamed each other “Ma” and “Pa” and were said to have the ideal marriage. Lombard was the ideal mate for Gable, a woman who could be glamorous and lovely, but who also could be a pal.

“I think marriage is dangerous,” said Lombard. “The idea of two people trying to possess each other is wrong. I don’t think the flare of love lasts. Your mind rather than your emotions must answer for the success of matrimony. It must be a friendship — a calm companionship which can last through the years.”

Sadly, their marriage was brief. At 4 a.m. on Friday, January 16, 1942, Lombard and her mother boarded a plane home to California. After refueling in Las Vegas, the plane took off on a clear night, and twenty three minutes later crashed into a mountain side thirty miles southwest of Las Vegas. All of the 23 passengers on board were killed.

Her husband joined in the search for her body, and on January 18, brought her and her mother home for burial in Forest Lawn Cemetery in Glendale,California.

Although Gable, who was married a total of five times, remarried twice after Lombard’s death, she remained the love of his life.

In early November 1960, Gable had just completed filming The Misfits, when he suffered a heart attack, and died later that month. Gable was buried shortly afterwards in the shrine that he had built for Carole Lombard and her mother at Forest Lawn.