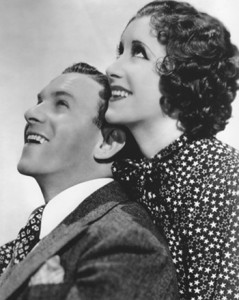 Born with one blue eye and one green eye and a twinkle in both, Gracie Allen arrived in this world on July 26, 1895 in San Francisco. Her dream was to be on stage, but while on her way there, she attended secretarial school. She was invited by her roommate to Union Hill, NJ, to see if she was interested in working with either member of a comedy act that was splitting up. The act featured Billy Lorraine, and a young man named Nathan Birnbaum. Birnbaum’s stage name — George Burns — was constructed from the Burns Brothers Coal Company and the nickname, George, that his brother occasionally used. Gracie chose George as a partner and launched the laughs heard ‘round the world!
In 1922, she and George Burns, who was born on January 20, 1896, made their first performance at the Hill Street Theatre in Newark, NJ, where they were paid $5 per day. George saw that the audience not only found Gracie’s character funny but they fell in love with her, just like he did. He immediately changed the act to give her all the funny lines and played her straight man. They became a smash hit.

[On George Burns] “My husband will never chase another woman. He’s too fine, too decent, too old.” –Gracie Allen

When Gracie went to work with George, she was engaged to another man.  That didn’t stop George! He carried a ring in his pocket until she finally agreed to marry him. It took four years for George to change Gracie’s mind, but they went on to become one of the funniest and best-loved couples in Hollywood.
Their radio career was launched when they were hired as the comedy relief team for bandleader Guy Lombardo. Their quick wit and snappy banter didn’t always sit well with Lombardo’s fans, but George and Gracie persevered until they got their own show in 1932. They focused on their classic stage routines and sketch comedy weaving the Burns and Allen style into different little scenes, not unlike the short films they made in Hollywood. They were also good for a clever publicity stunt, including a hunt for Gracie’s missing brother that had Gracie also turning up on other radio shows searching for him.

Their next stop was television. The George Burns and Gracie Allen Show, which premiered on October 12, 1950, was one of the first comedy series to make the successful transition from radio to television. Similar to the format of the radio program in which George Burns and Gracie Allen played themselves, the CBS domestic comedy was set in their home, the first television series to depict the home life of a working show business couple.
When Gracie died on August 24, 1964 in Hollywood of a heart attack, she was 69 years old. George, 68 at the time, was devastated, but years later, at the age of 79, his career was revived. He smoked cigars and drank booze every day and was still working and getting laughs at the age of 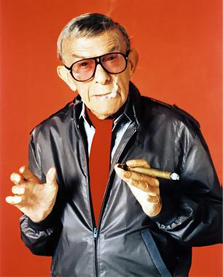 100. Married for 38 years, Gracie was the love of his life. He never remarried after her death.

[In a campaign speech (1940) when she was running opposite FDR on the 'Surprise Party' ticket] “As I look around me and see all these trusting and believing faces shining up at me with love and respect, tears come into my eyes. And do you know why? My girdle is killing me.”–Gracie Allen

The words “Together Again” are engraved on her and George Burns’ crypt at the Freedom Mausoleum at Forest Lawn cemetery inGlendale,CA. This inscription replaced the previous one, “Good Night, Gracie, which appeared on the crypt prior to George’s death.