Perhaps it’s not the most classic vision of contemporary marriage, but a fiery redhead and a smooth Latin lover managed to make it work, capturing our hearts every weekend on TV and becoming one of the most loved couples in Hollywood history.Lucille Ball was born August 6, 1911 in Jamestown, New York. Her dreams of Hollywood drew her west, and after an uncredited stint as one of the Goldwyn Girls in Roman Scandals (1933) she made Hollywood her permanent home so that she could pursue a career in films. She appeared in many small movie roles in the ‘30s as a contract player for RKO Radio Pictures, including a two-reel comedy short with the Three Stooges(Three Little Pigskins, 1934) and a movie with the Marx Brothers (Room Service, 1938).

She had heard a lot about a Latin lover from New York City, but when Lucille Ball first laid eyes on the Cuban-born Desi Arnaz on the set of the 1940’s musical Too Many Girls, she concluded that someone had sold her a bill of goods. “Desi was in greasy makeup and old clothes, and I thought he wasn’t so hot,” Lucy later recalled. The feeling was mutual. “This is an ingénue?” Desi asked director George Abbott when he saw Lucy’s bedraggled costume and fake black eye.

“I had started calling her Lucy shortly after we met; I didn’t like the name Lucille. That’s how our television show was called I Love Lucy, not Lucille.” –Desi Arnaz

When they got past the makeup, though, the chemistry was irresistible. “You could tell the sparks were flying with Lucy,” says Eddie Bracken, a costar in the film. “It happened so fast it seemed it wouldn’t last. Everybody on the set made bets about how long it would last.” But the 28-year-old B-movie queen and the 23-year-old Cuban bandleader were enthralled. “She talked about Desi all the time,” recalls her friend, actress Maureen O’Hara. “I said, ‘Go ahead and marry him if you love him.’” Six months later they did, forming a union that would produce an entertainment empire, two children, and one of the most popular television series of all time.

“How I Love Lucy was born? We decided that instead of divorce lawyers profiting from our mistakes, we’d profit from them.” –Lucille Ball 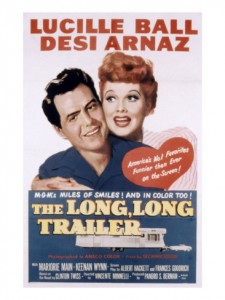 Desperate for a way to spend more time together, which meant getting Desi off the road, the pair created I Love Lucy. To prove that they could make the sitcom work, Arnaz and Ball formed Desilu Productions (the very first independent television production company) and used $5,000 of their own money to produce the pilot for I Love Lucy. In doing so, Arnaz and Ball made themselves their own bosses, and provided their product to CBS rather than working directly for the network or a sponsor, which was then the common practice in television.

“I’m sometimes scared of everything that has happened to us. We didn’t think Desilu Productions would grow so big. We merely wanted to be together and have two children.”–Lucille Ball 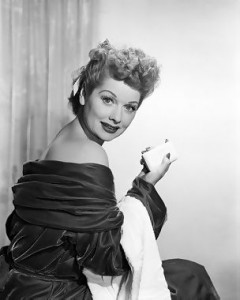 The shooting schedule gave them a chance to work on their relationship and finally have children. “All their hopes, plans and dreams for a happy future were wrapped up in that TV sitcom,” writes daughter Lucie Arnaz in her introduction to the recent book, I Love Lucy.

But as their dynasty grew, Desi worked 14-hour days and spent weekends on his boat with his latest “hot tamale.” The stress wore on the marriage, with Desi often exploding in abusive fits of temper. Once Lucy aimed a gun at Desi’s head and even pulled the trigger. When only a tiny flame spurted from the muzzle, Desi stepped up and lit his cigar.

“Lucy and I would love furiously and fight furiously.”–Desi Arnaz

“It got so bad that I thought it would be better for us not to be together,” Lucy said in court when they divorced in 1960. Lucy enjoyed a fulfilling, 28-year-marriage to comedian Gary Morton; Desi retired, selling his share of Desilu Studios to his ex-wife, and married his neighbor Edie Hirsch. But Lucy remained Desi’s loyal defender, visiting his deathbed in 1986. Ten years earlier, in his autobiography, Desi wrote of Lucy, “All I can say is that I loved her very much and, in my own peculiar way, I will always love her.”

“I hate failure and that divorce was a Number One failure in my eyes. It was the worst period of my life. Neither Desi nor I have been the same since, physically or mentally.”–Lucille Ball

Arnaz was diagnosed with lung cancer in 1986. He died several months later on December 2, 1986, at the age of 69. Lucille telephoned him two days before his death, on what would have been their 46th wedding anniversary. They shared a few words, mostly “I love you.” She said, “All right, honey. I’ll talk to you later.”

“When we got married, nobody gave it more than two weeks. There were bets all over the country, with astronomical odds against us.”–Desi Arnaz