They may never walk down the aisle and say the vows, but everyday for nearly 30 years Goldie Hawn and Kurt Russell have been saying I do to loving each other. Perhaps it’s the avoidance of actually getting married that has been the secret to their success, as both of them have previously failed in matrimony.
Goldie, who was born in 1945, honed her image as the kooky, daffy blonde in the sketch comedy show Rowen and Martin’s Laugh-In, followed by a series of movie roles in which she continued to develop her trademark sense of humor, including 1969’s Cactus Flower, which earned her an Academy Award.

A not-so-well-known Goldie movie from that era, 1968’s musical The One and Only, Genuine, Original Family Band, turned out to be fateful for her, as it was on this set that she met Kurt. However, their love story wasn’t quite ready to begin, as they would not become a couple for another 15 years.

During that time Goldie was married twice—first to actor-director Gus Trikonis and then to singer Bill Hudson, with whom she had two children, actors Oliver and Kate. 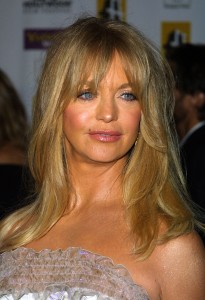 Goldie’s career continued to expand into a variety of roles. In 1983 she and Kurt finally crossed paths again when they were cast alongside each other in Swing Shift, and sparks flew. They’ve been together ever since.

On the TV’s CBS This Morning Goldie said “We’re in love. I wake up every morning. I love being with him. He brings me coffee. I give him a kiss. It’s ‘Good morning.’ We love each other. We fight the way people are supposed to fight. We love our lives together.”

Kurt’s movie life began as a child actor, and in the 1970s he began his decade-long run as the star of several family friendly Walt Disney films.

He met Susan Hubley on the set of the TV movie Elvis, married in 1979, and they had one son, David. They were in the process of getting a divorce when destiny intervened and Goldie walked back into his life.  Their son Wyatt was born three years later.

While neither actor has slowed their busy careers over the years, they are as close as ever, and the question about marriage still comes up all the time. 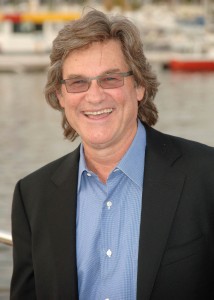 In an interview with the Close-up Film website, Kurt said “I understand the question and I guess it is a fascination to people. Marriage is an institution that has been around a long time. But we have found no need to involve ourselves in that symbol. It is a good symbol; there is nothing wrong with it. And at some time in the future maybe we will have a need or a desire to say ‘I feel like doing that now.’ And if we do, we won’t make any fanfare because we will be doing it for each other.”

Now in their 60s and doting grandparents to Kate’s two children, their love is as strong as ever. This adoring couple is proof positive that love makes its own rules. As she recently told Oprah Winfrey, “I wake up every morning and I really can make a choice. I don’t feel trapped. I can choose to love him, or not. I can choose to be there, or not. And, I like that. I like having someone in my life that I have to be responsible to, to be the best I can be for, so he feels the same way about me.”