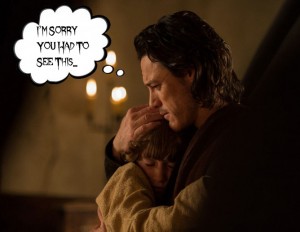 From a TruLOVE stories staff writer:

I was lured into seeing “Dracula Untold.” Yup. It wasn’t my first choice for a date night movie.  What is it about Vampires that can be so sexy though? I had been promised by my boyfriend that this movie was about the romantic angle of Dracula sacrificing himself for love and ultimately to protect his family. “It is an origin story with heart!” he assured me. But from what I saw of the trailers, I had some hesitation; this movie looked like it was going to be all bats and blood and war… But Luke Evans, that cute guy from the last Hobbit movie (yeah, the boyfriend dragged me to that movie too) is playing Dracula, so I agreed.

And it was terrible. Where was the love story? Where was the sexy? Actually, where were any of the things that make Dracula cool at all? I don’t want to spoil any of it for you,  and while I may be alone in wanting to see a romantic and heroic Vampire character when I go to see a Vampire movie, I think most audiences want a Dracula that is powerful, and evil and ya know…just cool.  None of that is really here in “Dracula Untold.”

I have decided the next date night movie the boyfriend is going to take me to will be “Gone Girl.” I assured him that even if “Dracula Untold” didn’t scare the pants off him, this movie would.