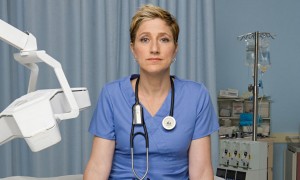 Edie Falco grew up in a very supporting and artistic household. Her father was in advertising and was a jazz drummer on the side. Her uncle was a novelist, playwright and poet and an English professor at Virginia Tech. But her biggest influence into the world of performance came from her mother, an actress who Edie often performed with in community theatre.

With an ambitious taste for challenging roles, Falco began her career with memorable film work in Hal Hartley’s The Unbelievable Truth in 1989 and Trust in 1991. She co-starred in Nick Gomez’s gritty crime drama Laws of Gravity in 1992 and had a small speaking role in Woody Allen’s 1994 film, Bullets Over Broadway.

In 1997, Falco began earning kudos for her performance as Officer Diane Whittlesey on the HBO prison drama Oz; and she stayed with the show for two years. In 1999, she landed her star-making role as Mafia wife Carmela Soprano in the acclaimed HBO series The Sopranos. She was awarded an Emmy, a Golden Globe, and Screen Actors Guild Award for her work on the show in 1999. Edie has won four Emmys, two Golden Globes and five Screen Actors Guild Awards in her career. Falco is the second actor to have won Emmys for lead acting in both a Drama and a Comedy series (the first actor to do so was Carroll O’Connor). 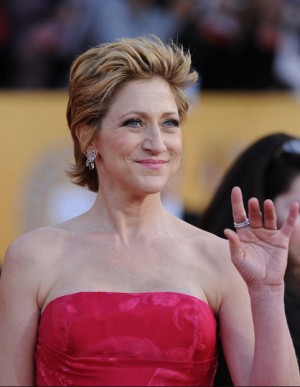 In 2009, she signed a deal with Showtime to star in the new drama Nurse Jackie. The show premiered in June 2009. After 7 seasons, Nurse Jackie is coming to an end this Sunday (June 28th). Falco admits that Nurse Jackie will be a tough act to follow. As the show’s central figure, she had a lot of sway for the first time in her career over how things were run. She would have been happy to continue with the show, if the decision had been up to her.

“We created a work environment on this show that is unrivaled in my life for the kindness and respect that we had,” she says. “It was not by accident. It worked for us, and it was magical.”

While still single, Edie had the overwhelming urge to raise children, so she decided to adopt and raise two wonderful kids. She is very passionate about children and donates to AmberWatch, a site that raises awareness for missing children.

Animals are also incredibly important to her, as she is a huge supporter of PETA and Animal Haven—an animal adoption site.

Her Broadway background keeps her involved in the world of the performing arts and she is a regular contributor to Broadway Cares/Equity Fights AIDS.