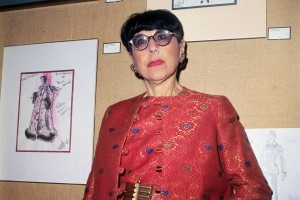 Edith Head is a fashion icon in her own right, having styled legendary actresses in the prime of Hollywood. Using forged sketches to land her first job at Paramount in 1924, Edith went on to create iconic costumes in Hollywood movies. She spent 43 years at Paramount where she dressed Audrey Hepburn in Roman Holiday, Sabrina, and Funny Face. Other actresses Edith designed for in her 50-year-long career include: Ginger Rogers, Bette Davis, Sophia Loren, Barbara Stanwyck, Shirley MacLaine, Anne Baxter, Grace Kelly, Elizabeth Taylor, and Natalie Wood. Unlike her male counterparts who dominated the industry, Edith consulted the actresses she was styling, making her a favorite among female stars. During her career, Edith won 8 Academy Awards—more than any woman has to this day—and is celebrated for the characters she helped create on screen through her intuitive vision and design.

For a slideshow of Edith’s most beloved costumes, visit NY Mag at: http://nym.ag/1g7Uq8e