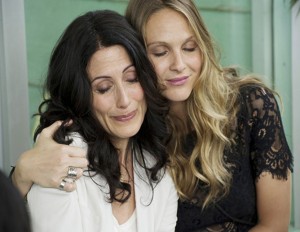 According to statistics, 10% of the population in the United States is divorced and the average length of the divorce proceedings is 1 year. That’s enough time to fit in 13 episodes of The Girlfriend’s Guide to Divorce, a new show that is premiering on Bravo.

TGGD is the first scripted series Bravo has ever had, and the show is based on the on the Girlfriends’ Guides book series by Vicki Lovine.

The show follows a best-selling author, Abby (Lisa Edelstein) of a self-help book series who is secretly hiding her separation from her husband, Jake (Paul Adelstein) as she starts to navigate her life as a single woman in her 40′s in Los Angeles. She starts to side with and take advice more from her divorced friends rather than her married ones and it leads her to some unexpected and life-changing experiences.

Accompanying Abby on her adventures are Janeane Garofalo as Lyla, a divorcee and entertainment lawyer, Beau Garrett as Phoebe, a recent divorcee and former model and Alanna Ubach as Jo, a Abby’s best friend from college who comes to LA.

Watch the first episode of the show here: