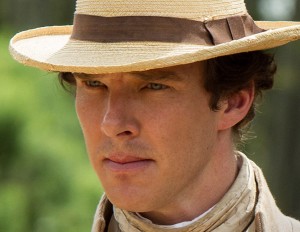 BENEDICT CUMBERBATCH  is best known for playing the title role of ‘Sherlock Holmes’ in Steven Moffat and Mark Gatiss’ stunning adaption of the Sir Arthur Conan Doyle books. It is a role that has earned him International acclaim and several awards including two BAFTA nominations, a Golden Globe and an Emmy® nomination for ‘Best Actor.’ Most recently on film he has portrayed Major Stewart in Steven Spielberg’s film adaptation of WAR HORSE and the part of Peter Guillam alongside Gary Oldman, Tom Hardy and Colin Firth in Tomas Alfredson’s TINKER TAILOR SOLDIER SPY. In 2011 Cumberbatch returned to The National Theatre, alternating the roles of ‘The Creature’ and ‘Dr Frankenstein’ in Danny Boyle’s production of Frankenstein earning him a Laurence Olivier Award and an Evening Standard Award for ‘Best Actor.’

Cumberbatch studied Drama at Manchester University before training at The London Academy of Dramatic Art (LAMDA). Early television roles included “Tipping the Velvet,” “Silent Witness,” “Nathan Barley,” “Spooks,” “Dunkirk,” “To the Ends of the Earth” and “The Last Enemy.” However it is his incredibly powerful portrayal of Stephen Hawking, the Cambridge Cosmologist in the BBC’s highly acclaimed drama “Hawking,” which bought him to the attention of an International audience and earned him his first BAFTA nomination. His second BAFTA nomination came in 2010 for his portrayal of Bernard in the BBC adaptation of “Small Island.”

On stage, there have been two seasons in Regents Park with The New Shakespeare Co, Linsrand in Trevor Nunn’s production of Lady from the Sea, ‘George’ in Tenessee Williams’ Period of Adjustment, ‘Teesman’ in Richard Eyre’s stunning West End ensemble Production of Hedda Gabbler, for which he received Olivier and Ian Charleston Award nominations, ‘Berenger’ in Ionesco’s Rhinoceros, The Arsonistsand The City at The Royal Court, and in 2010, he took the role of ‘David Scott Fowler’ in Thea Sharrock’s National Theatre, award winning Rattigan revival After the Dance.

Cumberbatch has recently starred in the BBC/HBO drama “Parades End.” Last year he played the role of the dragon ‘Smaug’ in Peter Jackson’s THE HOBBIT. Currently, Cumberbatch can be seen as the villain in JJ Abrams’ STAR TREK INTO DARKNESS. Later this autumn he will star as ‘Julian Assange’ in THE FIFTH ESTATE and ‘Charles Aiken’ in AUGUST: OSAGE COUNTY alongside Meryl Streep. A third series of “Sherlock” is in production for 2013.