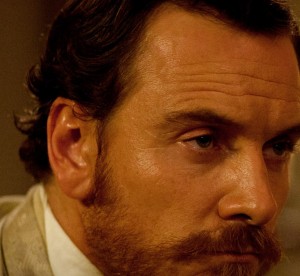 Born in Germany, and raised in Killarney, Ireland, MICHAEL FASSBENDER (Edwin Epps) is a graduate of London’s prestigious Drama Centre. His breakthrough role came when he was cast in the epic Steven Spielberg/Tom Hanks production, “Band of Brothers.” His big screen debut came with Zack Snyder’s hugely successful 300.

Fassbender’s performance as Bobby Sands in Steve McQueen’s Hunger won large critical acclaim and, following the film’s Camera D’Or winning premiere at Cannes in 2008, Fassbender scooped up numerous international festival awards including the British Independent Film Award (BIFA) and Irish Film & Television Award (IFTA) for ‘Best Actor’; a London Film Critics Circle Award; and ‘Best Actor’ honours from the 2008 Stockholm and Chicago International Film Festivals. He was honoured at the latter festival the following year as ‘Best Supporting Actor’ for his performance in Andrea Arnold’s Fish Tank. The portrayal brought him BIFA and IFTA nominations as well as his second London Film Critics Award. He was also an IFTA nominee for his performance in Marc Munden’s miniseries “The Devil’s Whore.”

In 2012, Fassbender was seen as the android David in Ridley Scott’s science fiction epic Prometheus. He will star in several upcoming movies including the Untitled Terrence Malick Project, a story about two intersecting love triangles set against Austin’s colorful music scene, and Frank, a comedy about a young wannabe musician who discovers he’s bitten off more than he can chew. Both titles are due for release in 2014; however, later this year, Fassbender can be seen reteaming with director Ridley Scott. In Scott’s The Counselor, written by Cormac McCarthy, Fassbender plays a lawyer, opposite Javier Bardem, Brad Pitt, Cameron Diaz and Penelope Cruz, who finds himself over his head having got embroiled in drug trafficking.