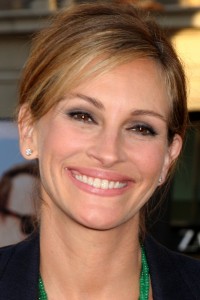 Julia Roberts became a household name when she starred in Pretty Woman, opposite Richard Gere, in 1990.  Her portrayal of a troubled but endearing prostitute who eventually fell in love with Gere landed her an Oscar nomination and a People’s Choice award for Favorite Actress. Since then Julia has starred in over 40 titles, not shying away from challenging or unusual roles, two of which won her Golden Globe  awards.  She played the fantastical Tinkerbell in Hook, alongside Robin Williams, and went on to play the hard-headed and determined Erin Brockovich, a role which landed her the Oscar for best actress in 2001. Her continued success allowed her to become involved in huge box office films, such as Ocean’s Eleven, and in 2003 she was paid $25 million dollars to star in Mona Lisa Smile, making her the highest paid actress for a single film at the time.  In the mid-2000’s, Julia started to dabble in voice acting, lending her talents to animated films, The Ant Bully and Charlotte’s Web.  She has since made her debut on Broadway, produced four American Girl films, was the global spokesperson for Lancôme, and has continued to act in popular movies such as Mirror Mirror.  She will star in the upcoming August, Osage County.  Julia had a slew of famous relationships, but finally wed her husband Daniel Moder, a cameraman she met while filming The Mexican, in 2002.  The couple have three children together.

Since rising to celebrity, Julia has had an interest in humanitarian causes.  In 1995 she went with UNICEF to visit Port-au-Prince, Haiti to raise awareness of and to learn more about the overwhelming issues of poverty plaguing the area.  She has donated money and time to help UNICEF achieve its worldwide goals of ending hunger and poverty, and hopes to inspire others to do the same through her actions.  In 2000, Julia narrated the documentary Silent Angels a film that looks at Rhett Syndrome, a neurodevelopmental disorder.  By lending her voice to the project, Julia believed she could draw attention to this debilitating disease and help grow the resources needed to one day cure it.  Along with working to alleviate poverty, hunger, and disease, Julia cares passionately about the planet. She was named the spokesperson for an Earth Biofuels Advisory Board promoting the use of renewable fuels. She also supports Gucci’s Chime For Change, a program which promotes female empowerment, and donated $2 million to the America: A Tribute to Heroes charity telethon, which gave money to the victims of the 9-11 tragedy.  Julia Roberts passionately supports her causes, and has given back in ways as diverse and rich as her acting career. On all fronts, Julia really is one of our favorites.

To support Julia’s cause, visit www.UNICEF.org