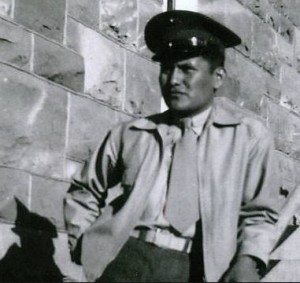 For more than two decades, Chester Nez kept silent about his role as one of the original Navajo code talkers responsible for developing an unbreakable code during World War II.

His death Wednesday at his home in Albuquerque, New Mexico, at age 93 was lamented by the Marine Corps as the end of an era — for both the country and its armed forces.

Nez was the last remaining of the original 29 Navajos recruited by the Marine Corps to develop the legendary code that was used for vital communications during battle.

He was a teenager when he was recruited in 1942 and assigned with the other code talkers to the Marine Corps’ 382nd Platoon at Camp Pendleton.

Together, they created a code, including developing a dictionary. Military authorities chose Navajo as a code language because its syntax and tonal qualities were almost impossible for a non-Navajo to learn, and it had no written form. The ranks of the Navajo code talkers swelled to more than 300 by the end of the war in 1945.

The original 29 were presented with the Congressional Gold Medal in 2001 by President George W. Bush.

“Our Navajo code was one of the most important military secrets of World War II. The fact that the Marines did not tell us Navajo men how to develop that code indicated their trust in us and in our abilities,” he said. “The feeling that I could make it in both the white world and the Navajo world began there, and it has stayed with me all of my life. For that I am grateful.”