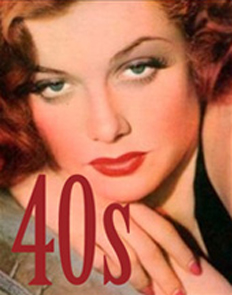 Chic and appropriately dressed for every occasion, the women of the 1940s were sassy, strong and adaptable. Think Katherine Hepburn!  World War II created extraordinary circumstances, requiring exceptional women, and you didn’t disappoint.  As men were shipped overseas, you took up their power tools (you knew how to operate an electric mixer after all!) and places at the assembly lines building ships and armaments. You succeeded at jobs no one ever dreamed a woman could do. Singles, married women, even mothers with small children, worked outside the home – to do so was patriotic. As food, gasoline and clothing were rationed, you organized the pantry, carefully planned meals and started sewing the family clothes.  Uncle Sam needed you and you would do whatever he asked!

The Most Feared, Secret Weapon – Women at Work! 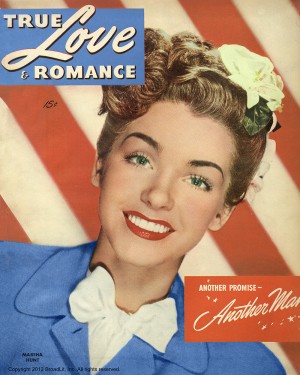 As World War II raged in Europe, the U.S.waited on the sidelines. But within days of the Japanese attack on Pearl Harbor, in December 1941, we were officially at war. Overnight the Great Depression, which had lingered with 18% unemployment, gave way to a wartime, economic boom. There wasn’t a moment to waste preparing the troops. Clothing, parachutes, armaments, and ships had to be produced, and fast! All factories transitioned to military production, operating 24/7. Consumer goods would have to wait. There were five million positions to fill – most of them traditional male jobs as welders, riveters, electricians. With men going off to war, who would fill these positions? Women would have to be trained and hired! Gulp!

Convincing women and employers would be no easy feat. The government boldly employed propaganda to persuade both.  Rosie the Riveter – her name taken from a popular song – became the image of a glamorous woman successfully doing a man’s job. She was featured on posters plastered all over town. She may have worn overalls, but her makeup was perfection! To persuade employers, the government minced no words. Leaflets declared “You’re Going to Employ Women.” And you‘re going to like it!  Many women worked in offices, businesses and 150,000 joined the Women’s Army Corps. Women proved they could do any job a man could do – even better. Everyone knew the war couldn’t be won without them!

No Dresses Below the Knees – That’s an Order!

With so many women, new to the workforce, they faced the dilemma of what to wear. What they did wear was dictated by the war: fabrics were rationed; government regulated the length of jackets (25-inch maximum) and skirts (no longer than the knee); Paris haute couture — the source of inspiration — was on hiatus. What’s an American designer to do? Create a uniquely American look — sportswear — coordinating pieces that were smart, simple, and classic. For day (and for working in offices), women wore short jackets and a-line skirts that fell just to the knee. This was the era of the leg! For women working men’s jobs, pants became the norm. Shoe styles were so practical (low, sturdy heels) and dowdy – even Carrie Bradshaw would be able to resist! One enduring trend — the two-piece bathing suit. Every year it shrank, and by 1946 it was a bikini. American women, however, rejected them for almost 15 years — who could blame them?

You Will Be Prettier and More Popular!

To offset the simplicity of the war-era clothing, hair took center stage with carefully coifed, elaborate and voluminous styles. Gone were the sexy one-eyed hairdos. Women needed to “face the world with both eyes in the clear.” Unusually shaped hats completed the look.  Most women let their hair grow to save money and time. Make up was dramatic with a focus on luscious, scarlet lips and arched brows. Beauty mavens, Helena Rubinstein and Estee Lauder, offered tips on make-up and hair styles. And Ms. Ratherly Stern (the Joan River‘s Fashion Police of her day), extolled the virtues of proper posture and well-tailored clothing, promising that anyone could be “prettier and more popular” if they just follow her advice! 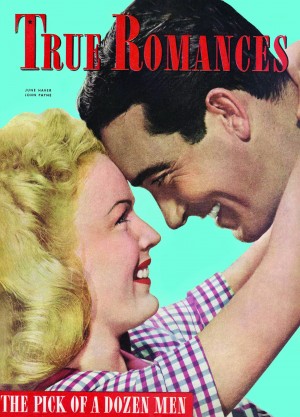 Pre-war dating was a competitive game. Young women wanted to have lots of dates, with lots of different men. Not that the women of the 1940s were promiscuous (though premarital sex did apparently increase dramatically), it was about being popular and figuring out who would be a compatible partner. Marriages actually increased as young couples rushed to tie the knot before men shipped off for war. Many of these marriages created “goodbye babies.” After the war, dating rituals changed. With a shortage of eligible bachelors — one million to be exact — women focused on finding a steady boyfriend, and a husband. The average marrying age went down — 18 for women, 20 for men. Sex was being more openly discussed, with an emphasis on science, as opposed to morality, but was still firmly placed in the context of marriage. “Sexual activity could only bring happiness through marriage.” For those who were sexually active, the diaphragm was considered the most effective form of birth control. The International Planned Parenthood Federation was founded in 1948.

Your Fun and Comfort Must Wait

Feeding the troops was the first priority; civilians got whatever was left. Everyday staples — sugar, flour, meat, potatoes — could not be counted on. When rationing was introduced in 1942, housewives learned to be creative. New culinary sensations were born – frank and beans, spam, and “depression cakes,” wheat-free, sugar free creations that would be all the rage decades later! To offset shortages, Americans were encouraged to grow their own food in “VictoryGardens.” They were so successful that by 1943, 40 million gardens yielded over a third of total vegetable crops.  With gasolinerationed, pleasure trips were prohibited. Carpooling was encouraged by posters that read: “When you ride alone, you ride with Hitler.” Milkmen returned to horse drawn wagons. Airlines suspended all civilian flights.

Shortages of material like steel, tin, paper, and rubber led to scrap drives. Old ice skates, aluminum pots and pans, tires — even household grease (1 tablespoon equaled gunpowder for 5 bullets) — were donated by families. Air raid drills became common place for those living on the east and west coast, where there was fear of attack. When sirens rang, everyone turned off their lights or pulled down their blackout shades. To pay for the enormous cost of the war ($53 billion), Government raised taxes and promoted war bonds — loans to the war department. The response was overwhelming. Over half of all Americans bought war bonds. This was a war of shared sacrifice -- unlike some of our recent wars! 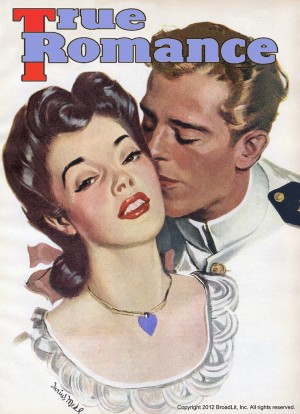 We may have been at war, but we still knew how to have a good time. There were lots of USO dances with handsome soldiers looking to jitterbug the night away. People fell in love with dance, whether it was watching Gene Kelly in “Singing In The Rain,” or hitting the dance floor yourself, helped with a few lessons from Arthur Murray‘s Dance School. Frank Sinatra, with his dreamy blue eyes, hit the scene, as well as Cole Porter. Mahalia Jackson sparked a gospel renaissance, and classical music was beginning to reach a broader audience. Radio offered lots of entertainment — soap operas, quiz shows, mysteries, comedy, as well as news. But by the late 1940s television would begin to take its place. Hollywoodcontinued its golden age with ambitious movies like Citizen Kane and Casablanca. When the Government asked for its help with the war effort, Hollywoodresponded with patriotic movies – up until the box office proved audiences wanted lighter fare! Women kept baseball alive during the war with the first ever All Women’s Professional Baseball League in the spring of 1943.  Women proved there was nothing they couldn’t do!

The War Is Over – Femininity Is Restored

When World War II ended in September 1945, America emerged as a superpower. Proud of our success and our new status, Americans were hopeful for the future, yet nostalgic for the past. As soldiers returned home, there was a deep desire to re-establish traditional roles and behavior. Translation: Ladies, you can return to being a homemaker. Two million women would be forced to give up their positions, although many quit voluntarily, happy to focus on babies, decorating and hosting BBQs. Rosie the Riveter was replaced with the image of a glamorous housewife, wearing a ruffled apron and high heels. Femininity was being restored.  There was a new way to dress - long skirts with loads of fabric — and a new emphasis on the hour-glass figure with nipped-in waists, tight-fitting sweaters and structured, up-lifting bras. Men wanted to protect women again – opening doors for them, ordering in restaurants. Women responded by behaving more submissively. So long Katherine Hepburn. Hello Marilyn Monroe!

Leave It to Beaver – The Early Days 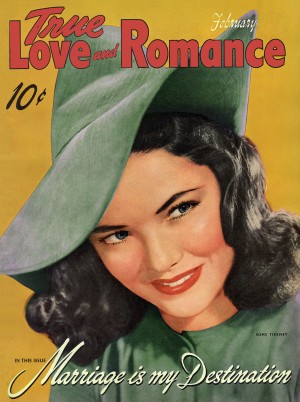 Government policies encouraged suburban family life with expanded veteran benefits and easy housing loans. The nuclear family was born– suburban, middle class, married and white. A husband’s income could support all the trappings of a middle-class lifestyle. Don’t we wish that was still true! Young married couples moved en masse to the suburbs and started having babies — the baby boomers. Life in the suburbs was not so different than it is today — lots of driving to little league, dance lessons, boy scouts — and parents who wanted to give their kids the best life possible. For every suburban housewife who settled in to domesticity, there were others who felt malaise, wistful for what they might have accomplished — if given the opportunity. They would raise their daughters differently. And those daughters would blaze the trail for equality in the 1960s!

BRRR! It’s Cold Out There

After the war, the United States shared super power status with the Soviet Union. The U.S.focused on rebuilding war-torn countries (through the Marshall Plan) and promoting peace with NATO and the United Nations. But Josef Stalin and the Soviets had other ideas!  When Soviet troops marched into Hungary,Bulgaria and Czechoslovakia, forcing the establishment of communist governments, Stalin was keeping his promise that communism would rule the world. Europe was now divided by an “Iron Curtain” (named by Churchill) into the communist East and the democratic West. Mainland China also became communist. Suddenly, everything the U.S.and the allies successfully fought for in World War II – democracy, freedom — was threatened and would have to be defended. A new war — the Cold War — began and would be fought for decades.

Rosie the Riveter may have disappeared as quickly as she’d been created, but her memory lived on. Traditional barriers had been lowered, and women proved themselves as capable and strong. Most may have returned to the role of homemaker — and the media did all they could to keep them there — but there undoubtedly was a permanent shift in the consciousness of women and men. The next generation of women would pick up where Rosie left off!