Women faced many challenges in the 1950s. True, there was the comfort and stability that comes from peace, a booming economy, a happy marriage and a house full of children. Yet, there were so many contradictory messages. Happiness was supposed to come from being a homemaker – a wife, a mother, yet being a “career girl” was gaining popularity. To attract a husband, and keep him, you were supposed to be attractive and sexy, but wholesome and proper. Sure, Marilyn Monroe had all the men swooning, but you weren’t supposed to be overtly sexual like her! It was a conservative time, after all, but traditional values were being challenged across all areas of life. The women of the 1950s smartly adapted and let their intuition guide them. They nurtured their children, supported their husbands, and managed their households with the efficiency of a CEO. And they took great delight in dressing like a woman! 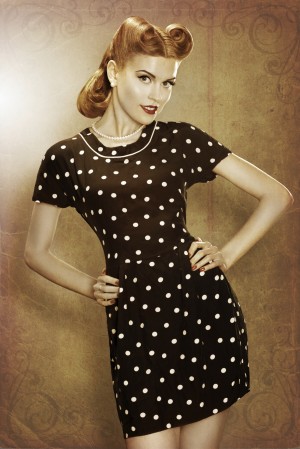 The era of femininity, introduced in the late ‘40s, continued its reign. The hour-glass silhouette, with soft rounded shoulders, nipped-in waist and voluminous skirts, made every woman feel like a princess. Women had to adjust to the longer lengths — one silver lining of the war was those short skirts – but walking and dancing in these luscious dresses made women happy to be women. Beautiful shoes returned with the highest of heels – stilettos so tall and thin they would leave marks on lobby floors. Women dressed for day – short gloves, hat and pearls — if they matched, even better!   The look was pristine and immaculate. Casual wear — narrow, ankle-length pants and pedal pushers, as well as blue jeans — began taking up more space in women’s wardrobes. Although new fabrics made clothes easier to care for, dressing required substantial effort — squeezing in to constricting girdles and brassieres was not easy!  By the mid-1950s, shapeless shift dresses gained popularity, as well as slim skirts worn with sweater sets. Women wore their hair short, with perfectly soft waves — thanks to regular visits to the hairdresser.

Don’t Be an Easy Number!

It seemed like everyone was getting married and rushing to start a family. The marrying age got so low, it was not unusual to marry right out of high school. If one was going to date the recommended “25-50 eligible partners” before settling on “the one,” there wasn’t a moment to waste! Dating began in earnest at age 12! Tweens were “going steady.” The term, of course, took on a new meaning, and was more like pretend marriage. 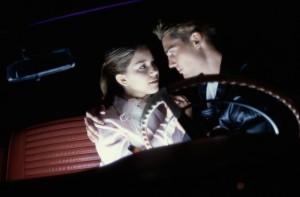 They were exclusive relationships, with a declaration of love — a class ring, a varsity jacket — but only lasted a few days, or at most a few months. Dating honored traditional roles with the boys doing the asking, paying, and expecting some affection in return. Necking and petting were accepted and common place, but pre-marital sex was forbidden — or at least the elders tried to make it so.  Instructional films admonished girls to not be an “easy number.” Despite society’s efforts to make virginity sacred, teen pregnancies increased and adoptions went up 80%! Morality was losing its power!

By contrast, sex in marriage was considered vital to a healthy union, which meant young wives potentially faced decades of child bearing. Effective birth control was essential! Diaphragms were the most popular form, but women awaited The Pill, which was developed during the 1950s, but wouldn’t become available until 1960. Alfred Kinsey, with his book on female sexuality published in 1953, confronted traditional views. His findings were shocking — differences in sexuality between men and women were shaped by social and cultural forces, not biology! Sexuality — a previously taboo subject — was now being discussed and debated. Adding fuel to the fire was the launch of Playboy Magazine in 1953 with Marilyn Monroe posing nude — it was tame by today’s standards, but still shocked! The seeds of the sexual revolution of the 1960s were planted and made everyone squirm!

How To Be a Good Wife 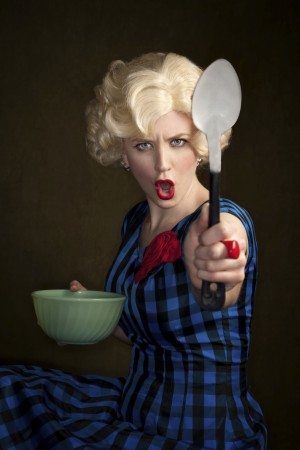 The role of women could be summed up by the existence of laws requiring them to take their husband’s name — no choice, no hyphenates! Their mission was to be a good wife. As the breadwinner, husbands returned home in the evening “work-weary.” A wife’s job was to brighten his day. Have dinner ready. Freshen up her makeup. Speak in a pleasant voice.  And last, but not least — “stay slim and beautiful.”  The role of wife, mother and homemaker was believed to be the most natural and fulfilling career for all women. Yet something was amiss. Tranquilizers became available in the mid 1950s, and within five years, 1.15 million pounds were sold, consumed mostly by women.  In 1956, McCalls had the highest single issue sale ever with the feature article, “The Mother Who Ran Away.”  The best-selling book Peyton Place, which would become a popular movie and TV series, touched a nerve with its sordid tale of life in a tranquil town wrought with lies, incest, infidelity and dysfunction. And Playboy illustrated the ambivalence (and their contempt — perhaps) of traditional female roles with a faux ad for the “perfect easy, low-stress, high-paying, part-time job” — that of a homemaker. There seemed to be no winning for women!

How Committed Are You To Being a Career Girl? 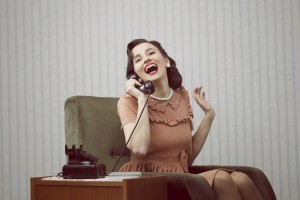 Employment of women increased steadily and reached a new peak in the 1950s. Even married women worked, especially after their kids were out of the house. By 1959, 36% of women worked. Most still occupied traditional female jobs — the First National Secretaries Week was in 1952.  Men suspected that the unmarried “career girls” were really just biding their time until their Prince Charming came along.  With women being systematically excluded from areas like law, medicine and business, most college-bound coeds focused on “M.R.S.” degrees, which gave them four years to find a husband. Society gave them every reason to believe that their best opportunities rested with the promising career of their future husband.

‘Honey, Is That Vacuum for Me?’

You shouldn’t have — really! But suburban housewives needed every convenience. Advertisers portrayed them as too busy to cook (true or a masterful way to create need?). Food products were designed and marketed to make the homemakers’ life easier. Canned food, Minute Rice, Pillsbury cookie dough, frozen TV dinners in aluminum trays shaped like a TV — in case you didn’t understand when and where to eat them. All these quick foods were to be served in the most attractive way possible. Fancy, automatic-defrost refrigerators, electric toasters and can openers also eased the burden. The suburbs gave rise to big shopping malls with discount stores — just like the ones we have today!  The first widely accepted credit card — a Diner’s Club card was created in 1958, making it even easier to buy, buy, buy!

Rebel WITH a Cause 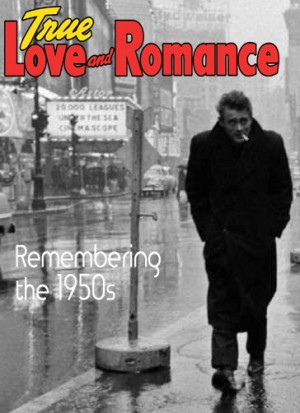 This was the first time there was a teen culture. The term “teenager” didn’t even exist until the 1950s. Initially, ignored by adults, teens yearned for their own music, style of dress – their own culture in effect. By the mid 1950s, they had become a force to be reckoned with. Adults reacted with condemnation and rules! But as rock ‘n’ roll emerged and the beat generation gained momentum, adults’ worst fears were realized. The tame sounds of the big bands were replaced with “devil’s music.” White teens began to embrace black musicians, like Chuck Berry and Little Richard, and the sexually tinged lyrics and gyrations of Elvis Presley. Portable record players and transistor radios allowed teens the independence to listen to whatever they wanted. Sorry Mom and Dad, there would be no turning back!  James Dean, star of Rebel Without a Cause, was an icon of teen ennui and set the fashion trend with jeans and leather jackets. The Beats, aka beatniks as they were coined in 1958, rebelled against uniformity and traditional values.  They began to congregate in the bohemian communities of New York and San Francisco. Their clothing — sunglasses, berets, and black turtlenecks — communicated their loathing of convention. Very early Goth! 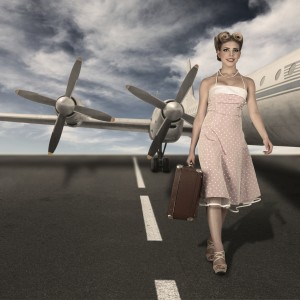 Television became the most powerful medium, selling everything from soap to presidents. TV ad revenues soared from $12 million in 1949 to one billion dollars in 1955! Programming was aimed at families and promoted traditional values — Father Knows Best, The Adventures of Ozzie & Harriet. Viewers compared their own families against these idealized ones and tried to measure up — bad idea! The popularity of television was seen as the demise of film byHollywood. They did whatever they could to lure movie goers back to the theaters — big science fiction movies, drive-in theaters and risqué comedies that made fun of adulterous fantasies.  With cars and planes, one could go anywhere. With air travel to Paris, Rome, Miami ,Hawaii, the jet set era was born.  The launch of Boeing’s 707 in 1958 made planes the preferred method of long-distance travel, surpassing both trains and ocean liners. Resorts and amusement parks –Disneyland opened in 1955 — met the needs of vacationing families.

The threat of communism dominated American life. We would ride an economic boom throughout the decade with low unemployment and great prosperity, but the Cold War, the fight between democracy and communism, haunted us. Our involvement in the Korean War was relatively brief, but reminded us that even our exceptional military power was limited. After the fighting ceased, Koreawas divided exactly as it was before the conflict. The Arms Race escalated with our testing of the hydrogen bomb in 1952. Americans had to accept that they now lived in a nuclear world, and there was no antidote for the anxiety it provoked. When the Soviets launched the first satellite into space in 1957, Americans felt inferior, and fearful that their children were not keeping up in math and science. Sound familiar? What if the communists would win, take over the world and destroy our way of life?  We had to be strong. Our faith and our families were the best defense.

The seemingly placid fifties were a maelstrom of change. The fight for racial equality, the challenge to gender roles and sexuality were gaining momentum and would reach a tipping point in the next decade. The women of the 1950s recognized that the foundation upon which they built their lives was evolving. They had to adapt. Most accepted their traditional roles and the choices they made, but knew life would be different for their daughters. They hoped the next generation would find the balance between motherhood and professional fulfillment that had eluded them. And the beat goes on!