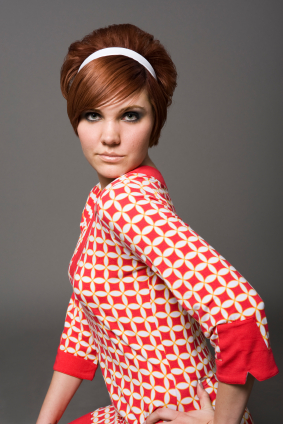 Hold on to your seats, the 1960s were a wild ride! We eased into the decade gently, confident that conservative values, traditional roles, and classic clothes still prevailed. We were an affluent society, enjoying the fruits of a flourishing economy. Yet our new young president,  John Kennedy, urged us to embrace self-sacrifice over selfishness, to work together to eliminate injustice and inequality. He set the tone for change, but no one was prepared for the social upheaval that would ensue. Our attitudes, behavior, mores — every assumption would be challenged. The pendulum, which began to swing — ever so slightly — in the 1950s from the right, would move hard and fast to the left, revolutionizing American life — especially for women.  And boy were we ready!

In the early 1960s, a woman’s place in society, her role as a homemaker, was intact. But 1963 would be a turning point. Betty Friedan’s The Feminine Mystique arrived on bookshelves. It resonated so deeply with women — young and old — it’s considered to be the catalyst for the women’s movement that followed. By refuting the popular belief that being a wife, mother and homemaker were naturally fulfilling for all women, Friedan gave a voice to dissatisfied housewives everywhere. The President’s Commission on the Status of Women would add fuel to the fire. It concluded that women were discriminated against in all areas of American life! Shocking! The Equal Pay Act required just that — equal pay for equal work. A woman could now dream of a brand new life, and the Pill would enable her to make it a reality. Introduced in 1960 — it would take a few years and several Supreme Court cases to be widely available — the Pill was a revelation. It gave women a previously unknown freedom to actually plan their lives. The second wave of feminism — which had been on hiatus for 40 years —  was born!

“You Don’t Own Me!“ was the second most popular song in 1963 (The Beatles’ “I Want To Hold Your Hand” was first!) and reflected the sentiment of the women’s movement with lyrics like “Don’t’ tell me what to do!” and “When we go out, don’t put me on display.” This is a great song! The civil rights movement and the passage of the Civil Rights Act of 1964 — prohibiting all forms of discrimination — empowered women to organize in earnest. Consciousness-raising groups were formed and by 1964 the “women’s liberation movement” was established. Several years later, the National Organization of Women (NOW) was founded and became a powerful lobbying group. The Miss America Pageant — seen as sexist in 1968 — was the target of protestors, who filled “Freedom Trashcans” with hair curlers, false eyelashes, bras and copies of Ladies Home Journal! It was the first time the slogan “Sisterhood is powerful” was used. “Women’s lib” was not embraced by everyone — or every woman – and the media portrayed its leaders as angry “you-know-whats.” But the goals of feminism — equal pay, equal opportunity, freedom from sexual harassment, shared responsibility for housework and childrearing — would inspire women for decades.

By the mid-to late 1960s more women than ever were entering the work force. Even married women with children worked outside the home, with 40% of them working full-time. Single women were delaying marriage and beginning to focus on careers. The fastest growing status combination: women 25, who were single, working, childless. Although most jobs held by women were in traditional female occupations, — teachers, nurses, librarians, administrative assistants, a small portion, 18.4%, were moving into professional careers. The trajectory was changing. In the early ‘60s achievement tests showed that girls’ scores declined from grade school to high school.  But by the end of the decade, more women were graduating from school and going to college. These young women believed their degrees would lead to substantive work — they were no longer seeking M.R.S. degrees! The real changes would be evident in the 1970s, and beyond, as subsequent generations were raised with new expectations.

Sex & the Single Girl,” by Helen Gurley Brown, glamorized single women with its publication in 1961 (it would inspire Sex & the City decades later.) A “how-to” guide on how to be sexy, advance your career and what to expect from an affair — stage by stage. It was scandalous, yet millions of women were hungry for its message -- it sold two million copies in three weeks! Traditional dating was quickly replaced — especially on college campuses — with group activities, like “partying” with drugs and alcohol. This was a trend that would “have legs.” Six million college students — the largest group ever — created a powerful youth movement intent on defying their parents — sex has always been the perfect way to rebel! Pre-marital sex became more of the norm — and not necessarily in the context of a relationship. “Free love,” sex between acquaintances, became acceptable! What would grandma think?  Marijuana, feminism, the Pill, and a culture of rebellion created the perfect backdrop for a “sexual revolution.” It may not have been as widespread as the media made it seem, but it would eventually touch all of society. The average age of first sexual intercourse became 16 for men and 17 for women.  Marriage rates fell as the age of marrying couples rose. If premarital sex was okay, marriage could wait! Divorce rates began to rise, as couples yearned to taste the freedom singles were enjoying.  The genie was out of the bottle!

These Boots Are Made for Walking

The early 1960s were about classic, ladylike clothing — dresses and matching coats, gloves and hats. Jacqueline Kennedy’s immaculate style epitomized the look. Hem-lengths hit the knee and were proper, but modern. Hair was well-controlled and big! Bouffant styles for day, elaborate up-dos for evening. It was the era of hairdressers — no one could create these looks on their own — and hairspray!  By the mid-to-late ‘60s, rules were out, freedom was in. Hemlines soared and mini-skirts became the defining fashion – even in haute couture. A-line dresses or hot pants with go-go boots (named after discotheque dancers who wore them) were the look for young women. Boots, no longer just for the rain, made a fashion statement that said cool, rebellious. Nancy Sinatra — daughter of Frank -- even wrote a hit song about them. Hippie styles — ethnic and bohemian prints, tie-dyed t-shirts, knitted shawls, faded bell-bottom jeans — would eventually influence mainstream fashion. Hairstyles matched the casual look — long, straight hair, short, geometric cuts. Makeup put the focus on eyes with dark eyeliner and pale — even white — lips. It may have been counter-intuitive given the women’s movement, but bikinis finally became widespread!

Avacado Is the New Beige

The average suburban home for the average family with two kids was on a half acre with a 1,200 square foot house. Each child had his/her own room. The family/rec room was supreme — where all the action took place. Homemakers’ work should have become easier with all the modern conveniences, but with higher standards, they seemed to have more work. Why do they keep raising the bar?   More household items were produced inJapan, especially electronics. Televisions were wide-spread but still pricey at $3,374 in today’s money. Everything was purchased — gone were any notions of “handmade.” Green was a popular home décor color -From- even for the kitchen. One could entertain graciously with the help of electric coffee makers and hot trays. Little girls played with Barbie and longed for their own touch tone phone. Young boys enjoyed the first action figure, G.I. Joe.

From Mary Poppins to Dr. Strangelove

The idealized family continued to dominate television — Ozzie & Harriet, The Dick Van Dyke Show — but there would be twists like Bewitched — featuring the most powerful stay-at-home-mom yet! Ed Sullivan brought The Beatles to American homes. Hollywood produced family movies — Mary Poppins, The Sound of Music — and movies for adults — Dr. Strangelove, Midnight Cowboy, Bob & Carol & Ted & Alice, The Graduate — that challenged taboos on sex and violence. Music’s transformation was informed and embraced the most by the counter culture. Elvis straddled the line between old and new, but would be replaced with the folk music of Bob Dylan and Joan Baez, who would be followed by classic rock groups — Jefferson Airplane, Grateful Dead and the Rolling Stones. Even the Beatles would re-invent themselves, responding to the changing times. Motown would become the most successful black-owned label with a new generation of rhythm and blues performers — Aretha Franklin, James Brown and Smokey Robinson. Night clubs became youth-oriented with free-form, frenzied dancing, psychedelic lights, live bands and deejays. The decade culminated with the biggest-ever musical event, Woodstock, a three-day festival of peace, music and free love — remembered fondly by a generation.

We faced big problems and believed government had the answers. In many ways it did. Under Kennedy came the creation of the Peace Corps and important civil rights legislation. After Kennedy’s assassination in 1963, President Johnson promised to build a “great society.” He spearheaded transformational reform — Medicare, Medicaid, Head Start, the Job Corps. His other legacy, unfortunately, would be the Vietnam War, the longestU.S.war that was never officially declared! That conflict fueled the youth counter culture, creating a generation cynical of government and “anyone over 30.” Initially, protests against the war were peaceful, but as casualties rose overseas, they exploded into violence at the 1968 Democratic Convention inChicago, as well as on campuses across the country. Racial tensions also erupted in urban communities resulting in riots across the country. We were a nation overwhelmed with anger, which led to unimaginable acts of violence, including the assassination of  political leaders — John Kennedy, Martin Luther King, Robert Kennedy, Malcolm X. Yet the 1960s was a time of great progress. We sent a man to the moon and began dismantling discrimination, setting the stage for a nation with greater equality and opportunity for all.

This decade of turbulence and mayhem was the most exciting and most profound for women — young, middle-aged and old. Expectations for women were forever changed and there would be no turning back. We stood tall, proud to be recognized for who we were and who we could become. We would support each other to dream big for all of us!  Skies the limit now!