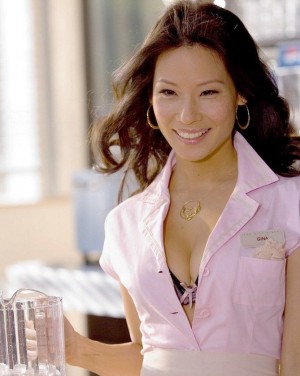 Lucy Liu was 19 when she was spotted by an agent while riding the subway. Apprehensive to work with him, she finally agreed after cross-referencing his credentials with the Better Business Bureau.  This relationship lead Liu to book her first commercial and begin her career in acting.  She spent the early 90s in small TV and film roles before landing the part of Ling Woo—specifically created for her by the writers—on Ally McBeal. In 1997 she was nominated for a Screen Actors Guild Award and an Emmy for her role in the series.  Liu’s next big move was playing Alex Munday in the movie Charlie’s Angels in 2000.  Also in 2000 she hosted Saturday Night Live and appeared in TV shows like Ugly Betty and Sex in the City.   This success lead to more movie roles—in 2003 Liu played O-Ren Ishii in Quentin Tarantino’s popular Kill Bill series, followed by a part in Chicago, and then opposite Kira Knightly in Domino. She has since starred in a variety of roles from providing her voice for Kung Fu Panda, making her Broadway debut in God of Carnage, a Tony-winning play and acting in a slew of other movies. Liu’s current project is working on the CBS television series Elementary, a Sherlock Holmes drama in which Liu plays the typically male part of Watson.  In 2013 she became a member of the Academy of Motion Picture Arts and Sciences.  When not acting, Liu pursuits her passion for art.  A painter and photographer, Liu attended the New York Studio School from 2004-2006 and often shows her work under a pseudonym, Yu Ling.

UPDATE* Season 3 of Elementary ends on May 14th! Make sure you tune in!

Incorporating her love for art with her love for charity, Liu has partnered with UNICEF—a United Nations program dedicated to providing much needed assistance to children and mothers in developing nations— on a variety of projects.  Liu first joined with UNICEF in 2004 when she was named an ambassador and traveled with them to Pakistan and Lesotho. Since then the actress has continued to give to UNICEF by holding art shows in which she donates all of her profits to the program.  She published a book featuring her artwork, Seventy Two, and vowed to donate proceeds from this as well. Liu was also named a spokeswoman for The Human Rights campaign in 2011 and has worked with Heinz to push back against anemia and other potentially life-threatening vitamin deficiencies that are occurring in children in developing countries.  In 2012, Liu was honored for her widespread humanitarian work by the charity Women for Women International and presented with the Champion of Peace award.

Visit UNICEF at http://www.unicefusa.org/ to find out how to donate, volunteer, or learn more about the challenges that UNICEF aspires to overcome.