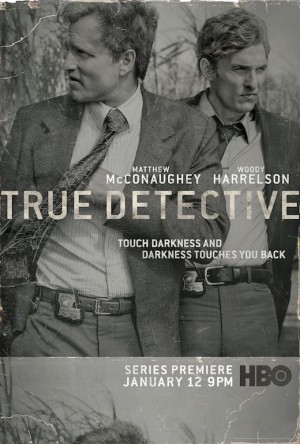 HBO’s eight-episode series, True Detective, stars Matthew McConaughey and Woody Harrelson as Louisiana state police detectives Rust Cohle and Martin Hart. The two are partnered up in the mid-1990s on what appears to be an occult-themed serial killer case. True Detective toggles between 1995 and modern day as two contemporary detectives reopen the case of almost 20 years beforehand. An eight-episode anthology franchise similar to American Horror Story, in which each season spins a different yarn with a different cast.

The show is the creation of crime writer Nic Pizzolatto, and the first work in television for Cary Joji Fukunaga, the director of Sin Nombre and Jane Eyre. Together, they have built a fluid, many-layered narrative that’s as intimate as a confession and as sinister as a nightmare. True Detective isn’t just one more roll in the anti-hero mir, it’s a show about meaningful themes — lots of chatter about history, memory, identity, religion, time, death, futility–while also being about two men (and a culture) afflicted with meaninglessness.

“I can’t imagine anyone playing that part better,” said Harrelson of McConaughey. “It was different than any other part I’ve seen him play before, and he knocked it out of the park.”