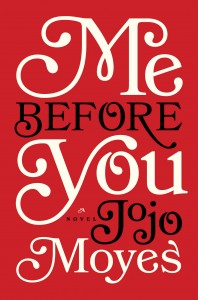 Me Before You Kissed by Hollywood

According to Deadline Hollywood reporter Mike Fleming Jr, Scott Neustadter and Michael H. Weber have been hired by MGM to adapt the best-selling novel Me Before You by Jojo Moyes for film. Me Before You is the story of a young English woman hired as the caretaker for an affluent Londoner paralyzed in an accident. Both are surprised by how the relationship blossoms. The novel brings to life two people who couldn’t have less in common, and is a heartbreakingly romantic story that asks, What do you do when making the person you love happy also means breaking your own heart?

Me Before You has remained on the bestseller lists since being published late last year. Neustadter and Weber, best known for (500) Days Of Summer and The Spectacular Now, have been on a novel-adaptation tear lately, with Amor Towles’ The Rules Of Civility, John Green’s The Fault In Our Stars, and Maria Semple’s Where’d You Go, Bernadette.