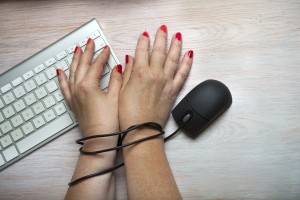 Is “Internet withdrawal” a real thing? I know that I experienced a sense of helpless isolation and frustration last week when my Internet connection became sporadic (until a cable tech fixed a faulty connection). As someone who actually remembers the days before computers, it is astounding to realize how dependent on technology we are in our daily routines, our communications and our work life.

With unreliable Internet service, I had to scurry to support my marketing consulting clients, and some projects were necessarily delayed. Various transactions and communications for my daughter’s wedding were disrupted. I didn’t get my blog post done because it was prioritized below work. But most projects still proceeded, and social communications and e-mail responses were handled via smartphone. 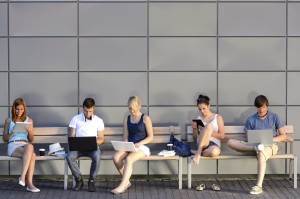 Yes, there was an underlying, anxious sense of disconnection, but it hardly seemed a symptom of a deeper disorder. In fact, per Wikipedia, Internet Addiction Disorder is a term coined in a satirical essay by Dr. Ivan Goldberg in 1995 and then taken seriously by researchers and, of course, the media, who have since produced new terms like problematic Internet use, compulsive Internet use, Internet overuse, pathological computer use and even iDisorder. All refer to Internet use that interferes with normal life–such as excessive computer game play, online gambling, porn viewing, shopping, constant social networking or workaholic behavior–to the extent that folks experience anxiety, depression and withdrawal symptoms similar to drug users if they go offline. It is not an official mental disorder in the Statistical Manual of Mental Disorders yet, but that doesn’t stop the media from headlining various studies documenting “Facebook addiction,” “Internet withdrawal” and its cousin “mobile phone withdrawal.”

In 2014, a Business Insider story noted that workaholics especially suffer withdrawal symptoms when cut off from the Internet (because they can no longer work 24/7). To be honest, maybe because, unlike my kids, I have lived in a world without digital technology, I soon banished anxiety over my temporary Internet loss with old-fashioned versions of Internet-enabled activities, like reading and face-to-face socializing. Frankly, I don’t think it’s the Internet that is the problem, except as a tool making it easier to indulge the real addictions: gambling, porn, workaholism, shopaholism, etc. But if you think you are afflicted by Internet dependency, maybe you should check out http://www.psychguides.com/guides/computerinternet-addiction-symptoms-causes-and-effects/