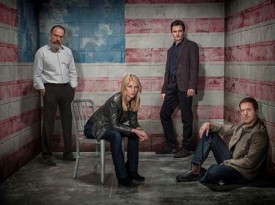 Showtime has been growing more and more respect for it’s edgy original programming. When it finds a hit show, it likes to stick with it. Even as major broadcast networks like ABC and NBC are striking out with new fall shows, premium cable channel Showtime is demonstrating confidence in two of its most ambitious dramas: award-winning political thriller Homeland and freshman period series Masters of Sex. Both shows have been renewed for additional seasons of 12 episodes.

Homeland follows Carrie Mathison, a Central Intelligence Agency operations officer who, after conducting an unauthorized operation in Iraq, is put on probation and reassigned to the CIA’s Counterterrorism Center in Langley, Virginia. In Iraq, Carrie was warned by an asset that an American prisoner of war had been turned by al-Qaeda.

Carrie’s job grows complicated when her boss, Director of the Counterterrorism Center David Estes, calls Carrie and her colleagues in for an emergency briefing. Carrie learns that Nicholas Brody, a U.S. Marine Sergeant who had been reported as missing in action since 2003, has been rescued during a Delta Force raid on a compound belonging to terrorist Abu Nazir. Carrie comes to believe that Brody is the American prisoner of war whom her asset in Iraq was talking about. However, the federal government and her superiors at the CIA consider Brody a war hero.

Masters of Sex revolves around the personal and professional lives of two real-life pioneers of the science of human sexuality – Bill Masters and Virginia Johnson. The series stars Michael Sheen, Lizzy Caplan, Caitlin FitzGerald, Nicholas D’Agosto, Teddy Sears, Beau Bridges, Allison Janney, and Julianne Nicholson. According to the premium network, Homeland‘s weekly views this year are hovering around 6.5 million, while Masters of Sex has been pulling 5.4 million (a huge jump on Homeland‘s first season numbers, due largely in part probably because of Homeland‘s lead-in, as well as Lizzy Caplan and the word “sex”). With those kind of viewing numbers Showtime would be crazy not to give it another season.

According to Showtime entertainment president David Nevins, “Homeland continues to prove its strength for Showtime and is one of television’s most exciting, provocative and widely discussed shows. It has grown its audience significantly in each of its three seasons.The critical and audience reaction to Masters of Sex since its great launch has been incredibly gratifying. It’s a privilege to get to work with such talented and creative people as Alex Gansa and Michelle Ashford, as well as their tremendous casts. They have each created truly original shows, with distinctive voices that are among the most admired series on television.”