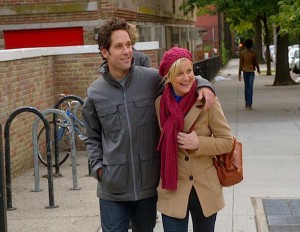 Romantic comedies sometimes have a way of taking themselves way too seriously. They often are victims of cliched moments and overused plot lines. It takes a truly wonderful pairing to make any good romantic comedy stand out from the pack.

David Wain (Wet Hot American Summer) decided to turn the genre on its head. Wain has shot a comedy that hits the ceiling of silliness and bursts through the plaster for a view of the upper floor. Every romantic comedy trope is roasted here, mocked and emulated with a wink. He reunites his stars from Summer, Paul Rudd and Amy Poehler, and together they tackle the absurdities of romantic comedies.

And according to Indiewire.com, “Forgoing restraint at every moment, They Came Together indulges in every goofy impulse of its players, always in search of the next punchline. The sloppiness pays off, with the humor hitting its marks more often than not. Granted, Wain and his cohorts are gunning for easy targets here, only occasionally digging deep in their deconstruction of a genre that’s just begging for it. However, in terms of its pure laughter quotient, They Came Together constantly delivers.”