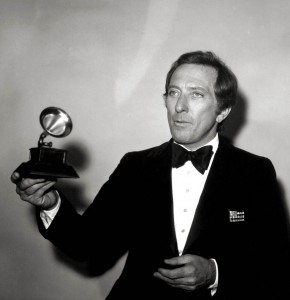 Andy Williams, beloved crooner and mainstay among the world of performers, passed away on September 25 after battling bladder cancer for almost a year. He was 84. Williams recorded 18 gold records, hosted his own variety show and owned the Moon River Theatre in Branson, Missouri, named after the song “Moon River,” with which he was closely identified. Moon River became a popular hit following its use in the film classic, Breakfast at Tiffany’s. On August 5, 1966, the 14-story, 700-room Caesars Palace casino and nightclub opened in Las Vegas, Nevada, with the stage production of “Rome Swings,” in which Williams starred. He performed live to a sold-out crowd in the Circus Maximus showroom. He headlined for Caesars for the next twenty years. Williams hosted the most Grammy telecasts, from the 13th Annual Grammy Awards in 1971 through the 19th Annual Grammy Awards in 1977, seven consecutive shows. On May 1, 1992, The Moon River Theatre opened in Branson and Williams was performing two shows a night, six days a week, nine months of the year. Only in recent years did he begin to cut back to one show a night. Retirement was not on his schedule. As he told the AP in 2001: “I’ll keep going until I get to the point where I can’t get out on stage.”

Williams is survived by his wife, Debbie, and his three children, Robert, Noelle and Christian.