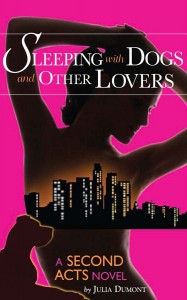 SLEEPING WITH DOGS AND OTHER LOVERS

Cynthia Amas wants to start a new career. The former marketing executive is launching herself as a personalized matchmaker, pairing friends and new clients together and sometimes stepping in to make sure their dates go perfectly. When Max, the ex she loved and lost, reappears in Los Angeles, she’s torn between renewing their relationship with supercharged sex and focusing on her career. She decides she can manage both; complications immediately arise. Her arrival at the wrong hotel room—and the resultant accidental same-sex groping that leaves her completely aroused—is only the beginning of a comedy of errors: Max winds up in bed with Cynthia’s groping buddy and her girlfriend, as Cynthia uses a little light S&M to take out her frustration on a boring suitor.On the matchmaking front, a team of paranormal dogs keep customer Lolita from closing the deal with a potential partner, and Cynthia’s mother decides to try a bit of matchmaking of her own, introducing Cynthia to a handsome gynecologist. Dumont’s serviceable prose weaves in and out of the characters’ lives and loves, providing plenty of titillating sex scenes without promising a happy ending. Instead, she offers a hook into the forthcoming series, which looks to feature friendship among a trio of wacky women. The misunderstandings and mischief will keep readers turning pages, and the light-weight content makes for easy enjoyment. There’s no moral here, nor any deeper meaning to be gleaned— just entertainment. The paranormal dogs are never fully explained, but Dumont manages to make that a curiosity rather than a cliff-hanger. The series will likely reveal those secrets as it continues, but in the meantime the comedic value makes this particular omission forgivable.

Read All Reviews For Sleeping With Dogs Here