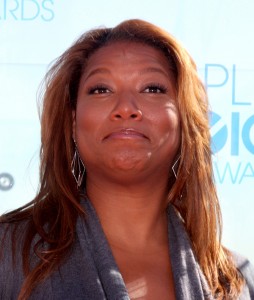 Queen Latifah burst onto the scene as a beat boxer and rapper for the hip-hop group Ladies Fresh.  Blown away by her talent, Tommy Boy Music signed her and put out her first single in 1988.  Since then it has been a continuous upward climb for the queen.  Latifah, born Dana Owens, was raised in New Jersey by her school teacher mother and police-officer father.  In high school she played basketball, performed in school plays, and worked on her rap game.  After graduation, Latifah was signed to a record contract, and following her debut album, her meteoric rise in the entertainment world began.  Along with creating music, she was picked to star in the Fox sitcom Living Single, and guest starred on the hit The Fresh Prince of Bel-Air.  She briefly hosted her own talk show, and would appear as herself on Hangin’ with Mr.Cooper.  Moving to the big screen, Latifah had steady roles leading up to her breakout hit as Matron “Mama” Morton in the Oscar winning film Chicago.  She received an Academy Award nomination for Best Supporting Actress.  Since then she has won numerous awards for other roles, including a Golden Globe Award, two Screen Actors Guild Awards, and an Emmy nomination. She also has a star on the Hollywood Walk of Fame.   The Queen has produced movies, hosted award shows, and provided her voice to animated films. She is a spokesperson for Cover Girl Cosmetics and has written an autobiography.  And for the passion that launched her career?  Queen Latifah has continuously put out music in a variety of styles ever since her debut album, 7 albums total, a Grammy win, and six more nominations.  Her new daytime television show, The Queen Latifah Show starts this month, and she is also the host of David Guggenheim’s latest education doc Teach, which aires on CBS September 6th (8pm/7pm central) on the Pivot channel.

Queen Latifah is a champion of charity. Where there is a cause, there is the Queen rallying to help—from AIDS and cancer research to programs that help the hungry, youths, women, and gays and lesbians, to Haiti relief efforts, Queen Latifah has been there with her star power and financial means.  While a proud supporter of many causes, the work closest to her heart may be the Lancelot H. Owens Scholarship Foundation.  The foundation was started by her family after the passing of her brother (who was killed in a motorcycle accident) as a way to honor him and the support Lance gave to his community.  The foundation provides financial aid to students from struggling neighborhoods to help them become capable leaders and offer them promising futures through education.   Latifah has been honored by Variety magazine for her work with the foundation.  At a fundraising conference she said: “Giving, to me, starts in your heart and then it extends to your purse and your wallet […] to me, when I give, I feel so good. I feel so good. I know I made a difference in someone’s life, even if they haven’t met me. It’s an opportunity to bless someone else.” Almost too fitting, Latifah in Arabic means very kind.

Visit http://lhosf.org/ for more information on how you can give to the Lancelot H. Owens Scholarship Foundation.