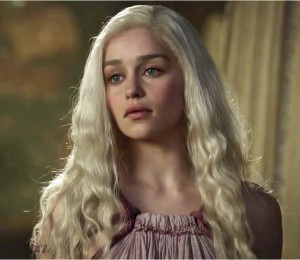 Emilia Clarke is one of the hottest young actresses working today. Her break through role came on HBO’s most popular show of all time, Game of Thrones, where she plays the dragon queen Daenerys Targaryen. While that show is on hiatus, Clarke has taken on a couple of other big time projects. She is traveling from the Seven Kingdoms of Westeros to Italy for 1950s-set psychological thriller Voice From The Stone in the fall. She’ll topline the adaptation of Silvio Raffo’s award-winning Italian novel La Voce Della Pietra, about a nurse who helps a boy through the traumatic sudden death of his mother only to become ensnared by a malevolent force inside the family’s castle.

Clarke will also be taking over the mother of the year role as Sarah Connor in a new Terminator,a quasi-reboot/sequel/relaunch of the beloved Terminatorfranchise, and is meant to spark a new trilogy. Arnold Schwarzenegger is reprising his role as the titular killing machine, and will be joined by new cast members.  Jai Courtney (A Good Day to Die Hard) is taking on the role of Kyle Reese, and Jason Clarke (Dawn of the Planet of the Apes) will play future version of Sarah’s son, world-saving resistance fighter John Connor.The film is set to open on July 1, 2015