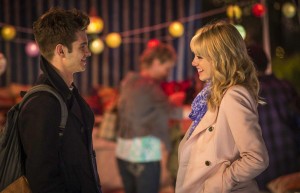 The Amazing Spider-Man 2 is back and we can’t wait to see Andrew Garfield and Emma Stone light up the screen again! Will their real life romance translate to the silver screen? The happy couple have been dating since they met and have worked together on the set of the first Amazing Spider-Man. Garfield was in the room when Stone stepped in for her screen test. She was the last one of the day, and according to Garfield, “she came in and it was like diving into whitewater rapids and having no desire to hang on to the side. Throughout shooting, it was wild and exciting. I couldn’t help but try to stay with her, keep pace with her and not let her get away.”

The first Amazing Spider-Man grossed $754 million dollars worldwide and the producers are expecting the sequel to surpass even those incredible numbers. The super-star cast is all in place for this to happen. Garfield and Stone are reprising their roles as Spider-Man and Gwen Stacy, respectively. They will be joined this time around by Jaime Foxx (Electro), Paul Giamatti (Rhino) and Dane Dehaan as the Green Goblin.

We’ve always known that Spider-Man’s most important conflict has been within himself: the struggle between the ordinary obligations of Peter Parker and the extraordinary responsibilities of Spider-Man. But in The Amazing Spider-Man 2, Peter Parker finds that his greatest battle is about to begin. For Peter Parker, there’s no feeling quite like swinging between skyscrapers, embracing being the hero, and spending time with Gwen. But being Spider-Man comes at a price.

Will the romance between Spider-Man and Stacy continue to burn as bright? What web of tragedy could be waiting for the happy couple? Find out this Friday (May 2) in theaters nationwide.

Check out Andrew Garfield in our Hollywood Hunks section and watch the trailer here: