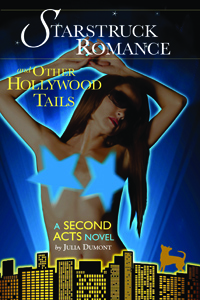 STARSTRUCK ROMANCE AND OTHER HOLLYWOOD TAILS
An intrepid young matchmaker in Hollywood sparks chemistry with an old flame, an ex-flame and an A-list actor, all while finding love for her clients in this engaging romance.

Cynthia Amas has no trouble juggling her new dating service and a slew of fresh clients from among the Hollywood elite. Her best friend, the outspoken Lolita, has her hands full running a dog-grooming business catering to the stars and managing her three dogs of varying sizes and temperaments, who bring her juicy gossip (at least she hears them talking!) from dogs whose masters are Hollywood stars. Of the two women, only Lolita admits she is looking for love. Cynthia claims she’s too busy, but she entertains erotic fantasies about her high school crush, Pete, and her new client, Jack Stone, a notorious womanizer. When Jack wants to move their relationship from business to personal, when her ex shows up ready to whisk her away for a romantic vacation, and when Pete might be close enough to touch, Cynthia’s world detonates. As she navigates the sexually charged politics of running a matchmaking service for the stars, her friends and even her libidinous mother, Cynthia finds herself caught between her desire for her old flame and the amorous and not-entirely unwelcome advances of Jack. While a feud with Lolita wreaks havoc on her voice mail and her nerves, Cynthia manages to tangle herself in  compromising positions with several potential lovers. Dumont’s (Sleeping with Dogs and Other Lovers, 2012) second foray into the turbulent, sexy, often-hilarious world of celebrity dating provides a delightful diversion. As the novel crests, however, a couple of quizzical twists reveal the flatness of several minor characters. Cynthia’s love connection snaps when her flirtation with another star comes to light, but her lover’s over-the-top reaction, followed by his sudden departure, will leave readers befuddled. Although the comical climax featuring Cynthia’s hard-to-believe self-control and Jack’s remarkably outlandish endowments turn an otherwise sexy novel silly, readers will respond favorably to Cynthia’s sensibility as a modern woman and her insight into flawed men.

A sexy romp through glamorous modern Hollywood as seen through the eyes of a self-possessed matchmaker who cannot find her own match. - Kirkus Reviews