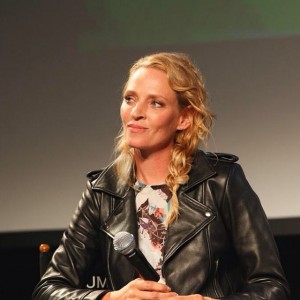 Jameson First Shot is truly a unique film competition. Each year, the company offers three first time writer/directors the opportunity to not only get their short films made, but to have an A-list celebrity star in them. This is an opportunity where budding filmmakers get to call the shots, direct a Hollywood star in a short film and have the backing of an award-winning production company. You couldn’t ask for more from a first shot at Hollywood.

Kevin Spacey headlined the inaugural campaign in 2012, and Willem Dafoe was the “star” in 2013. This year’s celebrity is Uma Thurman and she has appeared in all three of the winner’s films. This year’s winners are Jessica Valentine from the U.S. (Jump), Ivan Petukhov from Russia (The Gift) and Henco J from South Africa (The Mundane Goddess).

An expert team, including Kevin Spacey, Dana Brunetti and Uma Thurman,  judged the scripts and the finalist’s shortlisted scenes. The judges were looking for freshness, originality, good structure, good shots, good sound and above all, a great story. A shortlist of 20 candidates was chosen and asked to shoot a scene from a script provided by Trigger Street and submit a director’s treatment of their script. Based on those results, the winners were chosen in April.

The winners were flown out to L.A. in June to shoot their short films with Thurman, with an assist from Trigger Street on everything from casting and wardrobe to the final score and posters, which were created by Chris Lorenzo.

Since 2002, Spacey and Brunetti have been offering unrepresented writers and filmmakers a chance to showcase their work and receive feedback through Trigger Street Labs. Trigger Street has also produced major Hollywood films, including The Social Network, Captain Phillips and the upcoming Fifty Shades of Grey.

You can watch the three films here: