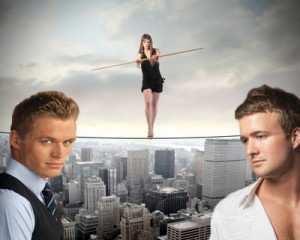 I work in advertising, mostly producing television commercials. I live in San Francisco, but the home office is in New York. So, I travel back and forth. Maybe you’ve already guessed it, but yes, I do in fact have two boyfriends . . . one on each coast. This has been going on for about a year and a half. One is a sexual athlete, a total jock, rippling with muscles . . . not a big talker, but who cares, you know? The other is more intellectual, a scintillating conversationalist, but good enough in the sack too. They’re polar opposites, and I guess that’s what I like about the situation. I can’t imagine dropping either one. I have an understanding with them. Both agree that we should be able to see other people, but neither guy knows about the other and I’m pretty sure that neither has anyone but me. I feel guilty about it sometimes, but I have never lied to either of them. Meanwhile, the New York guy has a convention in San Francisco next month, while I will also be there . . .  and the S.F. guy already knows that I’m coming.

Wow. That sounds like absolute heaven until it turns into absolute hell. Which I predict will occur long before you meet your maker. Like, say, the precise moment you touch down in San Francisco next month. I’m no prude. These kinds of things can work for short periods. God knows I’ve dated more than one man at a time at different points in my romantic career. But a year and a half is getting into deep-dark-secret-ville. And the trip to San Francisco is going to turn into a very unfunny rom-com before you can say Sex in Two Cities or 10 Things They’ll Both Hate About You. Wise up, girl. If you really want to continue seeing them both, have the huevos to come clean with them. If their “understanding” jibes with yours, you’re none the worse for it. If it doesn’t, you’re back on the market, this time maybe on the lookout for an athlete who can actually string a sentence together and that’ll be the best of both cities . . .  I mean worlds.