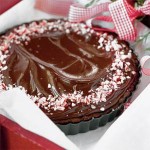 This delicious brownie tart recipe makes two tarts, so plan to share one with a friend or neighbor this Christmas season.

Microwave chocolate squares in a microwave-safe bowl at MEDIUM (50% power) 1 1/2 minutes, stirring at 30-second intervals until melted. Stir until smooth.

Bake at 350° for 20 minutes or until center is set. Cool completely on wire racks.

Beat 1/2 cup butter at medium speed with an electric mixer until creamy; gradually add powdered sugar alternately with milk, beating at low speed after each addition. Stir in peppermint oil.