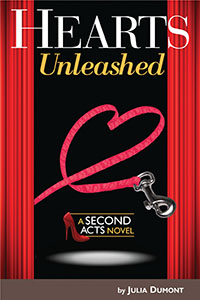 If you can do it once, that might be luck. Doing it twice surely takes some skill. With Hearts Unleashed, Julia Dumont has proved that her ability to blend romantic comedy and well-crafted trips to the bedroom is no fluke.

It’s hard to pick which of her three novels in the Second Acts series is the best, but there is certainly no worst. Perhaps the most enjoyable thing about “Hearts Unleashed,” though, is knowing these characters pretty well by now.

Dumont is careful to keep each personality consistent, so nothing seems out of place, even though the situations this time are quite different.

Cynthia still owns her dating agency, which continues to be successful. Also, she has maintained her reunited romance with musician Pete, who is out of the county for most of this story touring with his band.

What’s new is Ava Dodd Radcliffe, a billionaire widow who hires Cynthia to provide her with a bevy of people with interesting backgrounds and an openness toward sexual exploration.

But it wouldn’t be Dumont without a series of plot twists and seemingly disparate storylines that merge toward the climax.

On the down side, Cynthia’s mother appears less in this story, but there’s more Max, who has proved to be far and away the most compelling and complex character. He seems to know everyone, and has had some type of relationship with every woman in the great Los Angeles area and beyond. Yet, somehow, Dumont keeps making him a likeable character, worthy of affection from Lolita, and more importantly, her mystical trio of dogs.

Fans of Jack, the George Clooney-like actor, will be happy to see that he’s back and as charmingly annoying as ever.

Don’t worry if you’ve not read Starstruck Romance and Sleeping with Dogs and Other Lovers. Dumont is careful to provide enough back story to catch up newcomers while not bothering those in the know.

The best news is that Dumont seems to be hitting her stride with understanding how to build suspense and comedy, without forgetting that many of her readers are there for several doses of her signature steamy scenes.

The mark of a good series is leaving the reader wondering what will next happen to the characters, and Hearts Unleashed does exactly that.