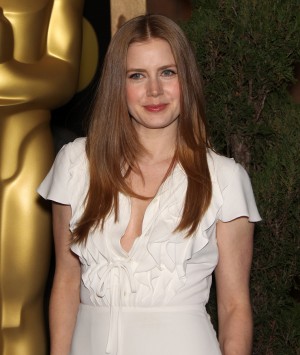 Amy Adams broke into the Hollywood circuit with her performance in the 2005 independent film Junebug, for which she received an Academy Award Nomination for Best Supporting Actress.  But before making it big, Amy was training to become a ballerina in her hometown of Castle Rock, Colorado. Feeling too constrained by the demands of ballet, Amy found she was more comfortable in the world of musical theater and soon was taking jobs in dinner theater companies first in Colorado and then in Minnesota.  While in Minnesota, the 1999 film Drop Dead Gorgeous starring Kirstie Alley and Kirsten Dunst happened to be filming, and Amy landed herself a role.  Convinced by Kirstie Alley to move to Los Angeles, Amy’s journey into acting really began.  It took a while for her to achieve success—lots of B-movies, commercials, and failed series— but following her role in Junebug, Adams’ career has been in full swing.   After Enchanted, Amy appeared in Doubt, Julie & Julia, The Fighter, The Master, and On The Road—to name a few. More recently, Amy starred as Lois Lane in the newest Superman movie, Man of Steel, and will continue the role in the sequels. She can currently be seen in the movie Her by Spike Jonze and her film American Hustle, in which she plays Sydney Prosser, the mistress of con-man Irving Rosenfeld (Christian Bale), was just released.  In her private life, Amy has been engaged to fellow actor and artist Darren Le Gallo since 2001.  The two had a child together, a girl named Avianna Olea Le Gallo in 2010. And despite recent pregnancy rumors, Amy told Vanity Fair for their January issue “I’m not pregnant,” and “I’m not getting married anytime soon!”

Update:  Amy Adams was recently nominated for a Golden Globe for her role in Big Eyes, Tim Burton’s biopic about painter Margaret Keane, whose husband, Walter (Christoph Waltz), takes credit for her work in the ’50s and ’60s.

In 2010 Amy was honored by Variety magazine for her charitable work.  While offering support to a variety of causes, one close to her heart is Ghetto Film School (GFS), a program in the South Bronx of New York that offers free courses in cinema study and production. Since its opening in 2000, over 400 students have taken part in the courses.  A slew of celebrities have volunteered at the school including David O. Russell, Spike Jonze, and Wes Anderson, all who volunteer their free time to teach and participate. Amy spends her time Skyping with GFS students and hopes to one day act in a student project. When asked why she loved GFS, Amy said, “I was really interested in getting into the film industry when I was younger but it wasn’t available to me where I lived[…]It seemed like this unattainable goal. When I heard these kids’ stories, I so identified with having the desire but not having the funds or access to education.”

Visit the Ghetto Film School website at http://ghettofilm.org/ to find out how to offer support.