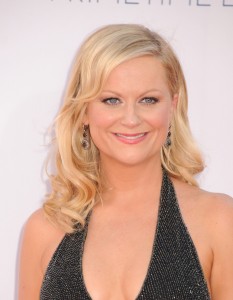 Amy Poehler has been making us laugh on the big screen, small screen and onstage since her introduction on Saturday Night Live in 2001. While studying at Boston College in the early 90s, Poehler was a member of the oldest comedy troupe in the United States called My Mother’s Fleabag. After graduating, Poehler decided to pursue her love of improv comedy and moved to Chicago to study at the famed improvisational theater, Second City. While there she joined a comedy team called the Upright Citizens Brigade, which boasts a number of famous former members, including her dear friend Tina Fey, Saturday Night Live alumni Horatio Sanz, and comedy writer Adam McKay, among others. The group moved from Chicago to New York City, where they gained success, eventually garnering a show on MTV and the opportunity to open their own improv theater. From there, Poehler transitioned to her new position on the Saturday Night Live cast, being one of only three people in the show’s history to be promoted from feature player to full time cast member after one season. Known best for her position as a Weekend Update anchor, Poehler went on to star in movies with her co-stars and eventually transitioned to the small screen as the lovable Leslie Knope in Parks and Recreation. More recently she successfully hosted the Golden Globes alongside long-time friend and fellow comedienne Tina Fey.

As a mother of two boys, Poehler is also dedicated to helping children discover their potential for change and helping others who need it most. Poehler created Smart Girls at the Party, a website and web series dedicated to teaching girl to change the world by being themselves. The website features interviews of young girls who are expressing their individualities in a number of different ways. The message is clear that each girl is capable of contributing to change with their own unique perspectives and skills. The website also features an “Ask Amy” section where users can ask Poehler anything that is on their mind. Girls can download a “Field Guide to Being Yourself”, inspiring wallpaper, and other free printables. Poehler is also dedicated to supporting the Worldwide Orphans (WWO) foundation as their Ambassador of the Arts. The WWO provides much-needed services for children, and Poehler is dedicated to supporting their cause of transforming the lives of orphaned children and helping them to become healthy, independent, productive members of their communities and the world.

To visit Amy Poehler’s Smart Girls at the Party website and view the web series, visit www.sgatp.net. To help Poehler continue to empower orphaned children around the world, visit www.wwo.org.