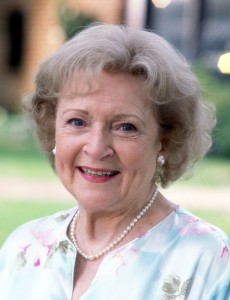 The Woman
With a career spanning seven decades, Betty White continues to amaze us with her talents in acting, singing and comedy. White first began her career in 1939, shortly after her high school graduation. Wasting no time, White sang for a television show on a small Los Angeles network, modeled, and performed for the Bliss Hayden Little Theater. When World War II broke out, White left the entertainment world to join the American Women’s Voluntary Services, but she returned to the business in the 1940s. White worked in radio and television, often performing in variety shows and hosting programs. Throughout the 1950s and 1960s, White appeared regularly on in many popular game shows, such as Password, What’s My Line, and Pyramid. In 1973 White made a guest appearance on the Mary Tyler Moore Show, which ultimately led to a role as a full-time cast member and an Emmy Award. After two short lived marriages, White met and married television producer and host, Allan Ludden. He died in 1981, three days before their 18th wedding anniversary. She has never remarried. In 1985, White scored her most iconic role as Rose Nylund on Golden Girls, which solidified her talent and celebrity status. Continuing to work in television and film through the current day, White has garnered many accolades, ranging from Emmy to Teen Choice Awards, proving she can entertain anyone regardless of age.

In the early 1970s, White was producing and hosting a series called The Pet Set, which told stories about celebrities and their beloved pets. While working on the show, the long-time animal lover became more interested in animal welfare issues. She became a trustee of the Morris Animal Foundation, and a few years later in 1974 became a member of the board of directors of the Greater Los Angeles Zoo Association. White wrote many books about animals, with her first book, Betty White’s Pet Love, focusing on how pets can take care of their owners. In 1992, she gave the world a glimpse into her life with her dear friend, Tom Sullivan, and his Seeing Eye dog Dinah. In the book, The Leading Lady: Dinah’s Story, White explains how their adored pet gave Sullivan, who was blind since birth, his first taste of independence. White recognized how special animals can be to a person, and her involvement with the Los Angeles Zoo has continued throughout her life. After serving as a Zoo Commissioner for eight years, White continues to donate funds and time to create a positive environment for all the animals that live at the zoo. In September of 2012, White revealed her latest book, Betty & Friends: My Life at the Zoo, which offers intimate and comical stories about her animal companions. White explains, “I’m actually the luckiest old broad alive. Half my life is working in a profession I love and the other half is working with animals.”

If you love animals, get involved in your community by supporting local animal welfare groups, such as the Humane Society or a rescue group. You can also volunteer at your local zoo and get informed about preserving endangered species.