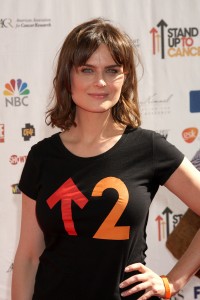 Emily Deschanel has made her mark on acting with her role as Dr. Temperance ‘Bones’ Brennan on the television comedy-crime drama Bones.  Daughter of renowned cinematographer Caleb Deschanel and actress Mary Jo Deschanel, Emily grew up surrounded by show business and followed her parent’s passion into a lengthy career of her own.  Along with Bones, which has captivated audiences for an amazing nine seasons (six of those with Emily as Producer), she has also managed to balance TV work with roles in movies such as: Spider-Man 2, Cold Mountain, My Sister’s Keeper, and The Alamo.  Behind camera, Emily has done voice-over work for The Cleveland Show and was an associate producer for the documentary How I Became an Elephant. In September, 2010, Deschanel married fellow actor and writer David Hornsby, and they welcomed their first child to the world in September, 2011. Stardom runs in the family. Her sister, Zoe, is the lead charcter in Fox’s New Girl. For her talents, Emily has received a Satellite Award nomination, two Teen Choice Award nominations, and two People’s Choice Award nominations in 2011 and 2012.

Emily supports causes that are as diverse and wide ranging as the roles she has played on screen.  She has collaborated with other actors to create videos supporting regular breast cancer screenings for Stand Up 2 Cancer and has provided support to the AmberWatch Foundation, Somaly Mam Foundation, and the Natural Resources Defense Council—just to name a few. Closest to her heart however, are animals and animal rights.  A long time vegan, Emily uses her celebrity to help raise awareness and fight for animal rights and the humane treatment of animals.  She has worked with PETA to promote a vegan lifestyle and was the official spokesperson for Walk for Farm Animals—a yearly event that aims to raise funds and awareness to stop farm animal abuse, sponsored by Farm Sanctuary.  Emily continues to partner with Farm Sanctuary to end animal cruelty through legislation, education, and adoption and rescue of at risk farm animals.  She has been honored by Mercy for Animals, The Humane Society, and the LA City Council for her passionate animal activism.