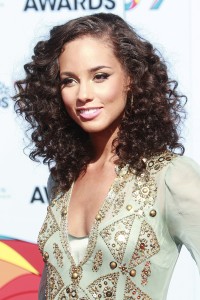 Singer-songwriter Alicia Keys has had us falling for her from the start. In 2001, she became the best-selling new artist and best-selling R&B artist with the release of her debut album Songs in A Minor. The album sold 12 million copies and Keys collected five Grammy awards, including Best New Artist and Song of the Year for “Fallin’.” After more musical success, Keys made many guest appearances on television series, such as Charmed and The Nanny Diaries. She also appeared on the big screen in the feature film The Secret Life of Bees, which earned her a nomination for the NAACP Image Awards.

Most recently, Keys released her fifth album, Girl on Fire, which became her fifth chart-topping album. Keys has explained that this album focuses on female empowerment, which is something she cares about deeply.

Keys is the co-founder and Global Ambassador for Keep a Child Alive, a non-profit foundation that is dedicated to providing treatment, care and other support services to families suffering from HIV and AIDS in Kenya, Rwanda, South Africa, Uganda and India. As Global Ambassador, Keys has visited many African countries and witnessed the suffering of the afflicted families first hand. Her work in Africa was documented in the film Alicia in Africa: Journey to the Motherland in 2008. Keys advocates for the well-being of these families, but she also lends her voice to others in need stateside and internationally. She has performed at many benefit concerts after tragedies, such as the September 11 attacks, the 2010 Haitian earthquake, and Hurricane Sandy. An advocate for all in need, Keys recently teamed up with Greater Than AIDS to launch a campaign called EMPOWERED that strives to provide pertinent information to women in the United States about HIV/AIDS.

Visit Alicia’s foundation, Keep a Child Alive at keepachildalive.org to find out how you can get involved or donate to this cause.

*Update
Alicia Keys won the  Best R&B Album Grammy last weekend for “Girl on Fire”.
The album showed Keys at her most vulnerable — and also at her most collaborative. She worked with Frank Ocean, Bruno Mars, Maxwell, Salaam Remi, Pop & Oak, Jamie xx, Emeli Sandé, Nicki Minaj and Kenneth “Babyface” Edmonds.
“Girl on Fire” featured an impressive blend of Keys’ hallmark classical riffs and R&B-pop melodies with a fresh mix of genre-blending instrumentation. The album debuted at No. 1 on the Billboard 200 chart — the fifth time she bowed at the top spot.