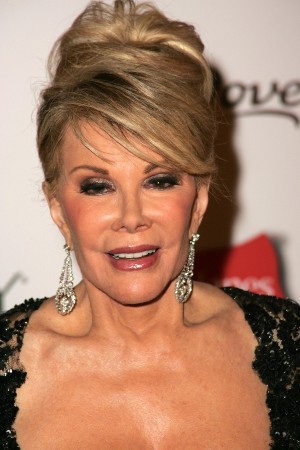 The daughter of Russian immigrant parents, Joan Rivers—originally Joan Alexandra Molinsky—was born on June 8, 1933, in Brooklyn, New York. Before entering show business, Rivers worked at various jobs such as a tour guide at Rockefeller Center, a writer/proofreader at an advertising agency and a fashion consultant at Bond Clothing Stores. During this period, agent Tony Rivers advised her to change her name, so she chose Joan Rivers as her stage name.

Determined to succeed as a performer, she appeared in a number of small plays, including a role as a lesbian opposite an equally unknown Barbra Streisand. When it became apparent that acting was not her forte, she switched to comedy and spent the next seven years doing the rounds of New York’s comedy clubs.

Her years as a struggling performer in the coffeehouses of Greenwich Village gave Rivers the experience she needed, and her big break finally came along in 1965: A booking on The Tonight Show Starring Johnny Carson ignited her career, as she was an instant hit.

In the late 1960s, Rivers landed her own program called That Show with Joan Rivers (also known as The Joan Rivers Show), which featured guests like Florence Henderson, Soupy Sales and Jerry Lewis. She also appeared on The Ed Sullivan Show and others. Before long, Rivers became a household name.

By the 1970s, Rivers was appearing on various television comedy and variety shows, including The Carol Burnett Show and a semi-regular stint on Hollywood Squares. She also began to headline her own show in Vegas in the 1980s as well as her own syndicated daytime talk show as well as developing and selling her own design of costume jewelry on QVC.

Rivers remained a popular TV personality, as well. She served as host of Fashion Police, which allowed her to continue to critique celebrities on the red carpet, and she had her own reality TV show Joan & Melissa: Joan Knows Best?  (2011-14), which also featured her daughter Melissa.

In August 2014, Rivers underwent surgery on her vocal cords in a New York medical clinic. However, she began to have serious complications from the surgery. She was taken to Mount Sinai Hospital and was put into a medically induced coma after reportedly suffering cardiac arrest. She died peacefully surrounded by family and close friends on September 4, 2014 at the age of 81.

Joan worked tirelessly on behalf of charities that were close to her heart: God’s Love We Deliver, The American Foundation for Suicide Prevention , Guide Dogs for the Blind, Habitat for Humanity, and Elton John Aids Foundation. She also dedicates her time to the National Osteoporosis Foundation and Wounded Warriors, among other remarkable organizations.

Rivers was an enthusiastic backer of marriage equality. An ordained minister of the Universal Life Church, Rivers herself officiated at least two same-sex weddings in New York State.