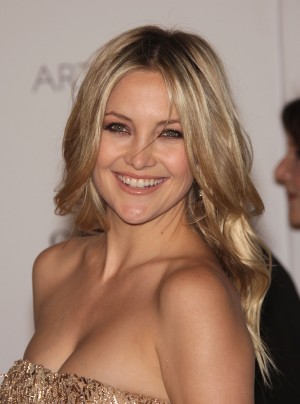 Kate Hudson was born on April 19, 1979, in Los Angeles, California. She is the daughter of movie star Goldie Hawn, who had Kate with 1970’s television comedian Bill Hudson. The couple divorced when Kate was only 18 months old and she was raised by her mother Goldie and longtime partner and actor, Kurt Russell.

No stranger to show business, Kate embarked on her own career and landed her first agent when she was seventeen. In 1998, she appeared in the little-seen independent film Desert Blue, alongside fellow up-and-coming young actors Christina Ricci, Casey Affleck and Brendan Sexton III. Hudson began the year 2000 somewhat inauspiciously, with a supporting turn as a virginal college student in the unimpressive teen thriller Gossip.

By year’s end, however, she had charmed her way into the hearts of moviegoers and critics with her breakthrough performance as Penny Lane, the leader of a group of girls, or so-called “Band-Aids,” who worship at the altar of 1970s rock & roll as imagined by writer-director Cameron Crowe in his autobiographical film Almost Famous. Originally cast in a smaller role, Hudson won a lead role after another young actress, Sarah Polley (The Sweet Hereafter, Go) dropped out. Her glowing performance earned her a Golden Globe Award and an Academy Award® nomination for Best Supporting Actress.

Kate Hudson was married to Chris Robinson, the lead singer of the rock band The Black Crowes from December 2000 until they divorced in October 2007. The couple has one child, a boy named Ryder Russell Robinson, who was born in January 2004. She is currently dating Muse band member, Matthew Bellamy.

*UPDATE Kate and Bellamy have recently announced that they are ending their three year engagement. They have been separated for some time but remain very close friends committed to being co-parents to their son Bingham.

Her latest role finds her working alongside Zack Braff in the new indie film, Wish I Was Here. Hudson plays the wife of a 35-year-old struggling actor who is trying to find purpose in his life.

Kate is teaming up with hairstylist, David Babaii, to create Wildaid – a range of hair products and styling tools designed specifically for colored hair – to boost funds for global wildlife conservation group, WildAid. WildAid, whose products are all paraben and sulphate-free and, naturally, not tested on animals, aims to end the illegal wildlife trade and boost populations of endangered species by working with governments and communities all over the world.

Hudson, along with other celebrities such as Beyonce, Gwyneth Paltrow, and Nicole Richie have been selling some of their favorite fashions as part of Goop’s annual closet sale. 100% of the profits will go to DonorsChoose, an organization in which public school teachers can directly ask for specific classroom needs.