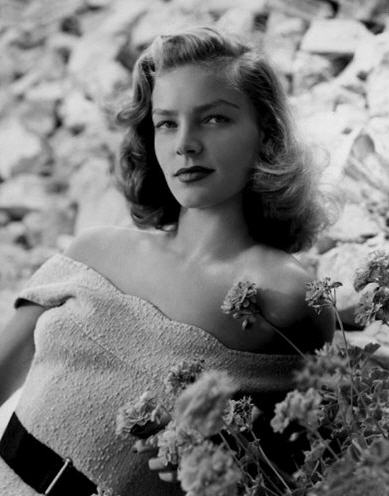 Lauren Bacall was a movie star from almost her first moment on the silver screen.

A fashion model and bit-part New York actress before moving to Hollywood at 19, Bacall achieved immediate fame in 1944 with one scene in her first film, To Have and Have Not. Leaving Humphrey Bogart’s hotel room, Bacall — a lanky figure with flowing blond hair and a stunning face — murmured:

“You don’t have to say anything, and you don’t have to do anything. Not a thing. Oh, maybe just whistle. You know how to whistle, don’t you, Steve? You just put your lips together and blow.”

The voice. If you heard it once, you never forgot. So distinctive was its smoky, sexual growl, you could pick it out of a lineup. Its owner wrapped it around words, controlling them, making them slightly dangerous, making them do her bidding, along with the men, and it was usually men, who were hanging on to each one.

Humphrey Bogart was no exception. He and Lauren began working together on and off screen and were soon the hottest couple in Hollywood. You can read about their love story and marriage here: http://trulovestories.com/news/celebrity-romance/bogart-bacall-an-everlasting-love/

The Academy-Award nominated actress received two Tonys, an honorary Oscar® and scores of film and TV roles. But, to her occasional frustration, she was remembered for her years with Bogart and treated more as a star by the film industry than as an actress. Bacall would outlive her husband by more than 50 years, but she never outlived their iconic status.

Lauren Bacall passed away at the age of 89 on August 12 having suffered a massive stroke.

Well known charities Best Buddies and Aid for AIDS have recognized Ms. Bacall’s charitable involvement. She’s been a vocal activist on the political front, extremely liberal “and proud of it” Bacall was once quoted as saying “Being a liberal is the best thing on earth you can be…you do not have a small mind…I’m anti-Republican, and it’s only fair that you know it.“.

She was ever protective of the Bogart legacy, lashing out at those who tried to profit from his image. In 1997, she appeared at the Chinese Theater in Hollywood for ceremonies launching the U.S. Postal Service’s Humphrey Bogart stamp.