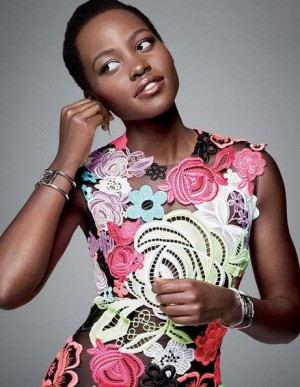 Lupita Nyong’o was born in 1983 in Mexico City, Mexico. Her parents, Dorothy and Peter Anyang’ Nyong’o, were in political exile at the time of her birth, but were able to return to their homeland of Kenya during their daughter’s childhood. She went to college in the United States and began her career in the film world working as a production assistant to further her love of acting and directing.

Nyong’o made her acting debut with the short film East River and subsequently returned to Kenya to star in the television series Shuga, an MTV/UNICEF-backed series that looked at sexual relationships among youth in Nairobi, aiming to promote HIV awareness and safe sex via storytelling.

Nyong’o honed her craft as a filmmaker by directing, editing and producing the 2009 documentary In My Genes, which followed the stories of several Kenyans who are living with albinism. Nyong’o ventured to the States and, pursuing her interest in acting, earned a master’s degree from the Yale School of Drama in 2012. Weeks before graduating she found out that she had landed the part of Patsey in director Steve McQueen’s drama 12 Years a Slave.  For her performance in the film, Nyong’o won the 2014 Academy Award for best supporting actress, among several other honors, and instantly became a beautiful and recognizable face in Hollywood.

Since appearing as Patsey, the 32-year-old star has entered a class of celebrities as powerful as their on-screen characters. In December she earned rousing applause from an audience of over 10,000 at the Massachusetts Conference for Women, where she was the keynote speaker. “Without the possibility of being bad, you cannot be extraordinary.” Nyong’o encouraged her listeners to take risks as they dare to reach for what they want without expecting to be perfect. They should “always have perfection to work towards. It gives perspective.”

Nyong’o other projects include starring opposite Liam Neeson and Julianne Moore in 2014’s Non-Stop, a thriller about an air marshal confronted by a deadly ransom threat. In June 2014, Disney’s Lucasfilm announced that the Oscar winner has joined the cast of the Star Wars: Episode VII. That film will be released in 2016.

Although she has not been in the public spotlight for very long, she has already managed to voice some groundbreaking thoughts regarding race, gender, beauty and charity, making it clear that she is a burgeoning beacon of the philanthropic spirit and a trailblazer for human rights advocacy.

DoSomething.org has released its seventh annual “Celebs Gone Good” list and narrowed it down to 20 stars who use their fame to help others. Nyong’o comes in at number #16.