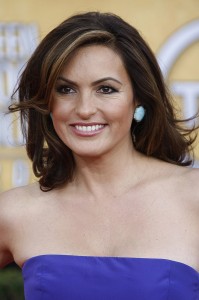 Mariska Hargitay has captivated television audiences in her iconic role as Detective Olivia Benson on the long-running show, Law & Order: Special Victims Unit. She talks tough with the boys at the station, but is understanding and protective of the victims of heinous sexually-based crimes.  Her character acts as an advocate for women in the workplace and for the victims she serves. As the daughter of the iconic actress and Hollywood sex symbol, Jayne Mansfield, and actor and former Mr. Universe, Mickey Hargitay, Mariska began pursuing an acting career early in her life. The beginning of her career included many beauty pageants in Southern California, but she quickly became involved in multiple television dramas. In 1999 she secured her role as Detective Benson with Christopher Meloni playing her work partner, Detective Elliot Stabler. Before taking on this intense role, Mariska trained as a rape crisis advocate and learned how many real-life individuals counsel victims and how she could bring authenticity to the character. After five years of portraying Detective Benson, Mariska felt she had a duty to help the victims offscreen. As the founder and president of the Joyful Heart Foundation, Mariska has helped thousands of sexual assault survivors tend to their deep emotional wounds long after the physical ones have healed.

Mariska divulged that after she began working on Law & Order: Special Victims Unit, many sexual assault survivors began contacting her. She explains that, “in many of these letters, people would disclose their personal stories of abuse—some for the very first time.” Mariska wanted to help these “people reclaim their lives and live them with a renewed sense of possibility and hope,” and established the Joyful Heart Foundation. The organization hopes to heal, educate, and empower survivors of sexual assault. The foundation provides resources and programs for those involved, including access to care-givers, therapeutic retreats and other therapies, and a strong sense of a supportive community.

How You Can Help

For more information on how to help survivors, visit the Joyful Heart Foundation at http://www.joyfulheartfoundation.org/.