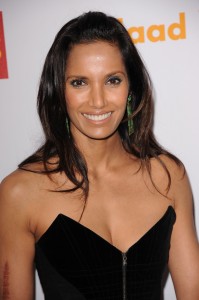 The Woman
Padma Lakshmi’s career began when she was discovered by a modeling agent in India at sixteen years old. The agent recognized her striking beauty, and he knew that she could be the first Indian model to walk the runways in Paris and Milan. Lakshmi had success as a model, but was also interested in pursuing her passion for culinary arts. She created a cookbook called Easy Exotic, which garnered her “Best First Book” at the World Cookbook Awards in 1999. Soon after, she was the host of her own series, Padma’s Passport, on the Food Network, as well as for the show Planet Food on the Discovery Channel. In 2006, Lakshmi joined Bravo Network’s Top Chef during their second season as the host and a judge. She is best known for her catch phrase as contestants are asked to leave, saying, “Please pack your knives, and go.” In addition to lending her culinary expertise to the show, she is also doing her part to help millions of women by acting as a co-founder and Board of Directors member of the Endometriosis Foundation of America (EFA).

Lakshmi is one of the 176 million women worldwide who are affected by the excruciating disease, Endometriosis. The disease manifests as menstrual tissue and fluids that abnormally implant in areas outside the uterus. Implants, or nodules, accumulate on the organs, causing painful menstrual cycles, chronic pelvic pain, infertility and pain during sexual activity. As a sufferer herself, Lakshmi knows firsthand how agonizing the physical effects of this disease are, as well as how emotionally devastating it can be for sufferers to find out that Endometriosis is the leading cause of infertility in women. With millions of women affected, there is still no proven cure, and many patients suffer even further by enduring ineffective surgeries and taking harmful medications. The EFA actively seeks to find a permanent cure, as well as provide support to those with the disease. Through public awareness campaigns, events, medical symposiums and funded research initiatives, the EFA continues to fight for state of the art treatment for those who suffer from Endometriosis.

Lakshmi explains that she “went through most of high school and college missing family occasions” because of the symptoms, and “taking very heavy pain medication including Vicodin, codeine, Anaprox, Naprosyn and a lot of other drugs” to deal with the pain.

“All of that physical pain is only one aspect of it. The other is the incredible loneliness that one feels,” she explains.

In support of EFA, Lakshmi has participated in many initiatives promoting women’s health. She has also lent her voice to the cause by sharing her story on the EFA website, as well as speaking about Endometriosis at India Today’s Woman Summit and Awards. The Emmy-winning host of Top Chef also hosts EFA’s annual Blossom Ball. In addition to these efforts, she recently joined Danskin in their “Move for Change” initiative, which seeks to support the health and wellness of women and children by raising funds for EFA and other foundations and charities.

Lakshmi had to endure the untreated symptoms of Endometriosis for the majority of her life, but she strives to make it different for other girls and women who suffer from this disease. In 2010 Lakshmi successfully gave birth to her first child, and a year later she was awarded the “Healthy Give & Take” Award for her tireless passion for the cause and efforts to raise critical awareness about Endometriosis.

To find more information about Endometriosis and the Endometriosis Foundation of America, visit endofound.org. The website also provides other ways to help, such as ways to host fundraising events and how to organize an “Endo” walk.

For more information about our She-roe, Padma Lakshmi, visit her website padmalakshmi.com