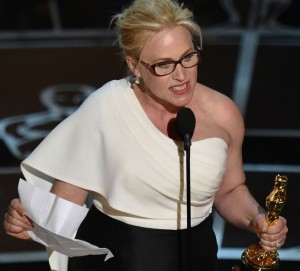 Patricia Arquette grew up in a famous family of actors and it seems her star has always shined bright. Even her grandparents were involved in the vaudeville theatre scene before she was born. Patricia decided to follow her lineage and tag along with her older sister Rosanna, who was having some up-and-coming success in films, when she was shooting Desperately Seeking Susan. While rooming with Rosanna, Patricia started getting small roles in several films, including Pretty Smart and A Nightmare on Elm Street 3.

The following year, at age 20, Patricia had a son named Enzo, with musician Paul Rossi. Her pregnancy caused her to lose out on several roles that may have shaped her career, but as it turned out, the timing allowed her to catch her first juicy and memorable role as Alabama in the film True Romance alongside Christian Slater and Gary Oldman.

After several fast-paced action films, Arquette gave a more subdued performance in Ed Wood (1994), a biopic starring Johnny Depp as the famed B-movie director. She showed that she could handle comedic material as well, playing Ben Stiller’s wife in Flirting with Disaster (1996). Around this time, Arquette married actor Nicholas Cage.  They separated after nine months, but acted as a couple in public until Cage filed for divorce in February 2000.

In January 2005, Arquette made her first transition to television with NBC’s Medium. Her role as (a fictionalized version of) psychic medium Allison DuBois won her an Emmy Award for Outstanding Lead Actress in 2005, as well as nominations for a Golden Globe in 2005, 2006 and 2007, a SAG Award in 2006, 2007 and 2010, and an Emmy Award in 2007. During this time span, she was a part of an epic filmmaking event when she starred in Richard Linklater’s film, Boyhood. The film chronicled a real life, 12 year story of  a single mother (played by Arquette) raising her two children. The role won her 2015’s Academy Award for best supporting actress.

Toward the end of her acceptance speech at the 2015 Academy Awards telecast, Arquette made a rousing political statement that unabashedly called for fair wages and equal rights for women in America. Watch the speech here

Patricia Arquette and Rosetta Getty founded GiveLove to assist displaced families after the devastating 2010 earthquake in Haiti. Givelove responded to the immediate need for sanitation in tent camps by bringing the best experts in the field of EcoSan to help start several large compost toilet projects at primary schools and NGO compounds.

She is a big contributor to The Heart Truth® and its supporters, which continue to raise awareness about heart disease in women to encourage them to take action and improve their heart h