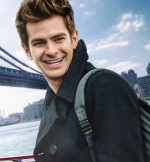 Everyone’s favorite neighborhood web-head is back! Sony Pictures has just released the much anticipated first trailer for the new Spider-man movie starring Andrew Garfield, Emma Stone and Jamie Foxx as the evil Electro. The trailer launched simultaneously on every Sony platform down to the Times Square billboard, and reams of other sites around the world. This is likely to become more common on event pictures, as all the studios embrace look at event pictures as global commerce instead of separate campaigns for domestic and international. The Amazing Spider-Man 2 starts its international rollout on April 16, 2014 and debuts in the U.S. on May 2, 2014. Here’s the trailer: