Where There’s a Point to Love 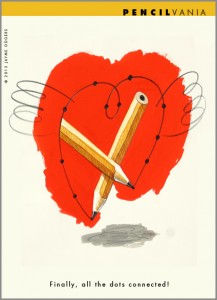 Today we want to introduce you to the imaginary world of Pencilvania created by award-winning artist and humorist, Jayme Odgers.

It has been said that “everything begins with a pencil.”  That’s completely true for the world of Pencilvania.  It is a state of mind, a place imagined, a world not unlike our own that is completely inhabited by pencils with personalities, passions, problems and points of view that draw us into their lives and make us laugh. Read More 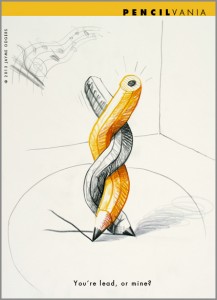 A Bit of History

Long ago in a far away place (which is rumored to be a few hours outside of Pittsburgh or, perhaps, somewhere near Cumberland, England) lies a place called Pencilvania.  Over the eons, Pencilvania evolved in its own way and in its own time.

But let’s not jump ahead of ourselves.  We should start at the beginning. Read More 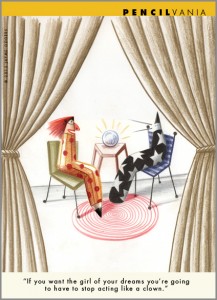 Born in Butte, Montana, Jayme Odgers graduated from The Art Center School in Los Angeles with a Bachelors Degree in Art with Great Distinction. In 1964 he became Paul Rand’s assistant by designing graphics for the IBM Pavilion fort the 1963 World’s Fair in Flushing New York.

In 1966 Odgers was awarded a Fulbright scholarship to study in Europe. Read More