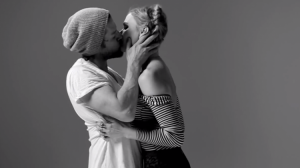 First kisses are awkward. And scary. And uncomfortable.  If you’re lucky, a first kiss can make your knees wobble.

Los Angeles-based filmmaker Tatia PIlieva, along with Wren Studio, asked 20 complete strangers to kiss for the first time on camera and managed to capture those, uncomfortable, heart-stopping and breathtaking moments of a first kiss. The result is a candid look at love, romance and chemistry that captures a real-life experience, but one that accelerates at an intoxicating pace. The “kissers” circle each other awkwardly at first, making fumbling small talk, sneaking looks at director Pilieva, and erupting into giggles. But once they’ve locked lips, they suddenly appear intimate, sexy, even compassionate toward each other.

The promotional video was created for Wren’s clothing and most of these strangers were friends of Pilieva and who work as professional performers, actors and musicians. It also doesn’t hurt that they are all attractive people.  They were not given lines or much direction other than they had to kiss, so their reactions appear to be quite genuine. And, according to Pilieva, none of the “kissers” were paid.

Pilieva told ABC News, “We kind of grouped them together just by instinct,” Pilieva said. “I was really nervous at first, but you can see how some of the people responded.” Some of the match-ups went so well, they didn’t end when the filming wrapped. “At least one couple went to the park for breakfast after, and another couple I heard winded up going to lunch,” Pilieva said. “I’m positive at least some friendships developed. I don’t know if any romantic relationships developed, but I could just be out of the loop.”

Whatever happened, there is still something alluring and innocent about the situation they all find themselves in. Something so wonderful, in fact, that over 10 million people watched the video on the first two days alone. More than 47 million people have watched the video on YouTube since it was posted this month on March 10. People are naturally drawn to romance and true love and this video shows how easy it is to cut to the soul of us all.

Watch the video below. . and blush a little: