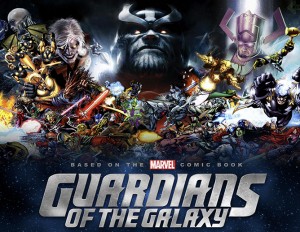 Guardians of the Galaxy is set to become the biggest August pre-seller in Fandango’s history, the online ticket company reports.

The Marvel space adventure is outpacing sales of the previous record-holder, The Bourne Ultimatum, and is also outselling other films made by the comic book production company, Thor and Captain America.

It is shaping up to be the hottest selling non-sequel of the year, besting The LEGO Movie, a sign of the strength of the Marvel brand. It currently accounts for 93% of tickets sold. Analysts expect the film will debut to north of $65 million this weekend.

Guardians of the Galaxy, the latest franchise to join Marvel’s ever-expanding cinematic universe, is a marked departure from the recognizable stable of superheroes movie-goers are used to. Instead of Iron Man or Captain America, we’re treated to a motley crew that consists of an everyman, a green Zoe Saldana, a live-action Kratos, Ranger Rick’s temperamental cousin and an overgrown weed. But don’t let their appearances or the unfamiliar intimidate you.Guardians of the Galaxy is laugh-out-loud funny and totally worth checking out.

Abducted from Earth by aliens when he was a child, Peter Quill (Star-Lord), played by Chris Pratt, is an interstellar adventurer who travels the stars in search of riches and, of course, women. In real life, Pratt is happily in love with his wife Anna Faris.

You can watch the Guardians of the Galaxy Trailer Below: